Linda Sue Park was born in Urbana, Illinois on March 25, 1960, and grew up outside Chicago. The daughter of Korean immigrants, she has been writing poems and stories since she was four years old, and her favorite thing to do as a child was read.

This is the first thing she ever published—a haiku in a children’s magazine when she was nine years old:

In the green forest
A sparkling, bright blue pond hides.
And animals drink.

For this poem she was paid one whole dollar. She gave the check to her dad for Christmas. About a year later the company wrote to her asking her to cash the check! Linda Sue wrote back explaining that it was now framed and hung above her dad’s desk and was it okay if he kept it? The magazine said it was fine, and her dad still has that check.

During elementary school and high school, Linda Sue had several more poems published in magazines for children and young people. She went to Stanford University, competed for the gymnastics team, and graduated with a degree in English. Then she took a job as a public-relations writer for a major oil company. This was not exactly the kind of writing she wanted to do, but it did teach her to present her work professionally and that an interested writer can make any subject fascinating (well, almost any subject …).

In 1983, after two years with the oil company, Linda Sue left her job and moved to Dublin when a handsome Irishman swept her off her feet. She studied literature, moved to London, worked for an advertising agency, married that Irishman, had a baby, taught English as a second language to college students, worked as a food journalist, and had another baby. It was a busy time, and she never even thought about writing children’s books.

In 1990, she and her family moved back to the U.S. because of her husband’s job. Linda Sue continued teaching English to foreign students. It took her quite a while, but she finally realized that what she really wanted to do was to write books for children. In 1997, she started writing her first book, Seesaw Girl. It was accepted that same year and published in 1999.

Since then, Linda Sue has published many other books for young people, including A Single Shard, which was awarded the 2002 Newbery Medal.

She now lives in western New York with the same Irishman; their son lives nearby, and their daughter lives in Brooklyn. Besides reading and writing, Linda Sue likes to cook, travel, watch movies, and do the New York Times crossword puzzle. She also loves dogs, watching sports on television and playing board and video games. When she grows up, she would like to be an elephant scientist.

If you are on Twitter, find Linda Sue Park at Twitter.com/LindaSuePark. 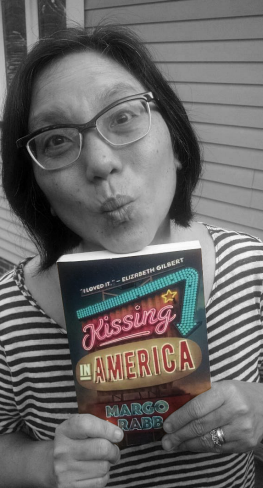 Author Linda Sue Park recommends Kissing in America (HarperCollins Publishers, 2015) by Margo Rabb as a Great Read for ages 14 and up. Check out more Great Reads on thencbla.org.