Johnson became president upon Lincoln’s assassination. However, he had not been Lincoln’s first vice president. Hannibal Hamlin had served as vice president during Lincoln’s first term, but was removed from the Republican ticket during Lincoln’s reelection campaign. Johnson was selected to run as Lincoln’s running mate for his second term because he was a southerner who had proven himself dedicated to healing the country. Indeed, he was the only southern Senator who opposed secession and also refused to relinquish his office as the southern states seceded.

Johnson was thrust into office in the turbulent wake of the Civil War, and he was dedicated to rebuilding the Union as Lincoln had envisioned, with leniency toward the South. Johnson pardoned everyone who took an oath of allegiance, but required Confederate leaders to seek special presidential pardons. Radical Republican members of Congress opposed Johnson’s lenient methods and passed their own legislation, including restrictions against the president. Johnson remained at odds with Congress and much of the public regarding Reconstruction throughout his tenure. Ultimately the Radical Republicans enacted their own plan, which enforced military rule in the southern states.

The battles between Johnson and Congress escalated when he removed the Secretary of War, Edwin Stanton, who had insisted to Johnson that the southern military governors were answerable to Congress, not the president. Johnson was subsequently charged with “high crimes and misdemeanors” and impeached for violating the recently enacted Tenure-of-Office Act. He was acquitted by the Senate, but did not seek a second term. Johnson was later reelected as senator for Tennessee in 1874, but died only a few months after taking that office.

Regarding his refusal to leave his position as a senator representing Tennessee when every other southerner had left, Johnson asserted, “I voted against Lincoln. I spoke against him. I spent my money to defeat him. But still I love my country.”

About the status of African-Americans, Johnson stated, “When we take the Declaration of Independence and connect it with the circumstances under which it was written, is there a man throughout the length and breadth of this broad Republic who believes for one instant that Mr. Jefferson, when he penned it, had the negro population in his mind? Notwithstanding, he says that all men are created equal, and that they are by their Creator endowed with certain inalienable rights, that amongst these are life, liberty and the pursuit of happiness. Is there an intelligent man throughout the whole country . . . who will come forward and say that he believes that Mr. Jefferson, when he penned that paragraph of the Declaration of Independence, intended it to embrace the African population?”

1865: The U.S. abolishes slavery via the 13th Amendment • George Innes paints Peace and Plenty • 1866: Alfred Nobel invents dynamite • 1867: The U.S. purchases Alaska from Russia for $7.2 million • Karl Marx publishes volume I of Das Kapital • 1868: The 14th Amendment to the Constitution is ratified, which protects an individual’s rights and privileges of citizenship, and ensures due process • Louisa May Alcott writes Little Women • Tchaikovsky writes Symphony No. 1 • The skeleton of a Cro-Magnon man is discovered in France.

Johnson is the only president who never went to school. His family did not have the money to have him educated, so he and his brother were apprenticed to a tailor as young boys. They ran away after two years, but continued working as journeymen until Johnson eventually opened his own business. He became quite skilled and continued to sew his own suits throughout his life, and was subsequently nicknamed the “Tennessee Tailor.” Through self-dedication and the assistance of his wife, he taught himself how to read and write. His wife also taught him math.

The birthplace of Andrew Johnson is a late 18th-century structure which was a kitchen and residence behind the inn where his parents were employed.

Two of Johnson’s homes and other related buildings are open to the public along with a visitor center. Nearby is the cemetery where Johnson and his wife are interred.

President Andrew Johnson spent most of his adult life in Greeneville and, although never a student at the college, was active on its Board. The museum and library exhibits family and political memorabilia along with Johnson’s personal library. 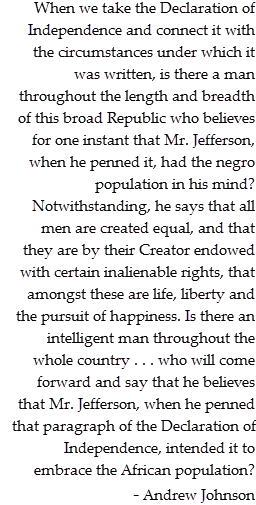