Before becoming president, Harrison served as a U.S. senator, where he advocated for the rights of Native Americans, homesteaders, and Civil War veterans. As president, Harrison signed the Dependent and Disability Pensions Act that compensated veterans who had been disabled from nonmilitary causes.

Harrison is also well remembered for his efforts in shaping foreign policy and regulating business. The first Pan-American Congress met in Washington in 1889, which sought to establish a forum discussing regional solidarity of the American continents. This group became permanently known as the Pan-American Union in 1910. Harrison also signed appropriation bills to strengthen the Navy in order to expand U.S. influence in Central America and the Pacific.

Harrison signed the Sherman Anti-Trust Act of 1890, which sought to protect trade and commerce by allowing the federal government to control private businesses and prosecute illegal monopolies. Harrison was also faced with continuing domestic disputes regarding high tariff rates that had created a surplus of money. Despite protests from the agricultural community, Harrison signed the McKinley Tariff Act, which raised the average tariff rate to 48%, while also eliminating some tariffs. The increased tariffs were widely unpopular, ultimately leading the Republican Party and Harrison to lose public favor as well as the White House. Indeed, Harrison was defeated by his predecessor, the Democrat Cleveland, in the next election.

Harrison commented on slavery in his Inaugural Address: “Shall the prejudices and paralysis of slavery continue to hang upon the skirts of progress? How long will those who rejoice that slavery no longer exists cherish or tolerate the incapacities it put upon their communities? I look hopefully to the continuance of our protective system and to the consequent development of manufacturing and mining enterprises in the States hitherto wholly given to agriculture as a potent influence in the perfect unification of our people. The men who have invested their capital in these enterprises, the farmers who have felt the benefit of their neighborhood, and the men who work in shop or field will not fail to find and to defend a community of interest.” (March 4, 1889)

“The manner by which women are treated is a good criterion to judge the true state of society. If we know but this one feature in a character of a nation, we may easily judge the rest, for as society advances, the true character of women is discovered.”

“What questions are we to grapple with? What unfinished work remains to be done? It seems to me that the work that is unfinished is to make that constitutional grant of citizenship, the franchise to the colored men of the South, a practical and living reality.”

“We Americans have no commission from God to police the world.”

1889: Alexander Gustave Eiffel designs the Eiffel Tower • A punch card system to operate machinery and store data is created by H. Hollerith • 1890: The first film is shown in New York • Rubber gloves are used by surgeons for the first time at Johns Hopkins Hospital • 1892: Anton Dvorak becomes the director of the New York National Conservatory of Music

Harrison was the only president whose grandfather (William Henry Harrison) had also been president. Throughout his life, though, he was determined to rely on his own efforts and achievements rather than ride on his grandfather’s coattails. He once told a crowd of his grandfather’s admirers, “He will not build high who had not built for himself.” Despite his continuous attempts to distance himself from his grandfather’s fame, Harrison’s campaign managers did exploit the relationship during his presidential campaign with the slogan, “Grandfather’s Hat Fits Ben.”

Harrison was the first president to use electricity in the White House. However, he and his family were fearful of being shocked, so they refused to touch the light switches and simply left the lights on all the time.

This brick Italianate Victorian home figures prominently in Benjamin Harrison’s presidency. It was here that he learned of his nomination and, over the following weeks, spoke to over 300,000 people who marched to the home. He also learned here of his election to the presidency. The home maintains many of Harrison’s own furnishings and the carriage house features an exhibit about the women’s suffrage movement. 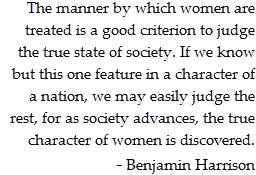