On his book websites, Brian Selznick writes the following about himself:

“I was born in 1966 in New Jersey. I have a sister who is a teacher, a brother who is a brain surgeon, and five nephews and one niece. I studied at The Rhode Island School of Design and after I graduated from college I worked at Eeyore’s Books for Children in New York City. I learned all about children’s books from my boss Steve Geck who is now an editor of children’s books at Greenwillow. While I was at Eeyore’s I also painted the windows for holidays and book events.

“My first book, The Houdini Box, which I both wrote and illustrated, was published in 1991 while I was still working at the bookstore. Since then, I have illustrated many books for children, including Frindle by Andrew Clements, The Doll People by Ann Martin and Laura Godwin, Amelia and Eleanor Go for a Ride by Pam Muñoz Ryan and The Dinosaurs of Waterhouse Hawkins by Barbara Kerley, which received a 2001 Caldecott Honor.

“I have also written a few other books myself, including The Boy of a Thousand Faces, but The Invention of Hugo Cabret, Wonderstruck and The Marvels are by far the longest and most involved books I’ve ever worked on.

“I live in Brooklyn, New York, and San Diego, California, with my husband David Serlin.” 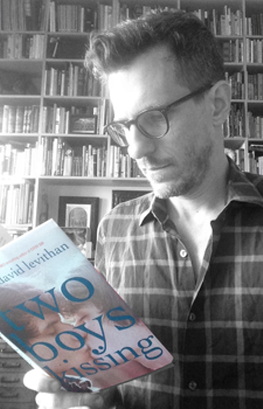 Author and illustrator
Brian Selznick recommends Two Boys Kissing by David Levithanas (Alfred A. Knopf, 2013) as a Great Read for ages 12 and up. Check out more Great Reads on thencbla.org.