Coolidge became president when President Harding died unexpectedly. Coolidge was visiting the family farm in Vermont and sleeping when messengers arrived with the news. His father happened to be a notary public, and so he administered the oath of office as Coolidge held his hand on the family Bible. His father also had the privilege of being the first to address him as “Mr. President.”

Though he had not been elected to the presidency, Coolidge is remembered for returning a sense of trust to the executive office in the wake of scandals that had surrounded Harding and his administration. Alfred E. Smith, a Democrat and four-term Governor of New York, actually wrote that Coolidge was “distinguished for character more than for heroic achievement. His great task was to restore the dignity and prestige of the presidency when it had reached the lowest ebb in our history . . . in a time of extravagance and waste.”

America was indeed prospering in the midst of a strong economy when Coolidge took office. He believed less government intervention to be best, and he therefore chose neither to stop the economy’s expansion nor to assist with the depressed state of agriculture. In fact, he vetoed two agricultural relief bills, as well as a plan to produce inexpensive federal electricity on the Tennessee River. He did, however, sign two revenue acts that reduced taxes on the wealthy. He is also credited with reducing the national debt.

During Coolidge’s administration, the National Origins Act was passed, which established permanent immigration quotas. Also, the U.S. and 14 other nations signed the Kellogg-Briand Pact, which renounced war as a way of settling disputes.

Coolidge became very popular as president and was elected to serve a second term having succeeded using the campaign slogan, “Keep Cool with Coolidge.” At this time, “cool” meant “calm” and “serene.” His slogan therefore highlighted Coolidge’s steady demeanor and also advocated a continuation of the existing state of affairs, rather than a call for change. He would probably have won a third term, but he declined to run, asserting, “I do not choose to run for President in 1928.” Instead, he chose to retire from politics and write.

“The business of America is business.”

“There is no dignity quite so impressive, and no independence quite so important, as living within your means.”

“It is the duty of a citizen not only to observe the law but to let it be known that he is opposed to its violation.”

“The more I study [the Constitution] the more I have come to admire it, realizing that no other document devised by the hand of man ever brought so much progress and happiness to humanity.”

Coolidge once noted to Herbert Hoover about living in the White House, “You have to stand every day three or four hours of visitors. Nine-tenths of them want something they ought not to have. If you keep dead still they will run down in three or four minutes. If you even cough or smile they will start up all over again.”

1923: The first birth control clinic opens in New York • Martial law is enacted in Oklahoma to protect people and property from attacks by the KKK • Sigmund Freud writes The Ego and the Id • “Bix” Beiderbecke organizes a jazz band in Chicago • George Gershwin composes Rhapsody in Blue • E. N. da Costa Andrade publishes The Structure of the Atom • L. A. Bauer analyzes the earth’s magnetic field • Lee de Forest demonstrates a process for integrating sound into motion pictures • Jacob Schick patents the electric razor • 1924: The Pan-American Treaty is signed to prevent conflicts between nations • The U.S. limits immigration to exclude all Japanese • Robert Frost’s A Poem with Notes and Grace Notes wins the Pulitzer Prize • Gandhi fasts for 21 days to protest the political and religious feuds of Hindus and Muslims in India • Richard Strauss performs the opera Intermezzo in Dresden • R. C. Andrews discovers skulls and skeletons of Mesozoic dinosaurs in the Gobi Desert • The U.S. produces 485 million tons of coal and 45 million tons of steel • The World Chess League is founded at The Hague • Ford Motor Company produces its 10 millionth car • The first Winter Olympics is held at Chamonix, France, and 16 nations participate • 1925: Mrs. Nellie Tayloe Ross of Wyoming becomes America’s first female governor • F. Scott Fitzgerald publishes The Great Gatsby • Dmitri Shostakovich writes Symphony No. 1 • The Scopes Trial, which considered the legality of teaching evolution in the classroom, is held in Tennessee • The Charleston is a favorite dance, and women’s fashion features straight dresses with no waistlines cut above the knees • 1926: Ernest Hemingway writes The Sun Also Rises • Duke Ellington’s first records are available • Robert Goddard fires the first liquid fuel rocket • The U.S population is 115 million • The U.S.S.R. population is 148 million, Japan totals 85 million, Germany totals 64 million, and Britain totals 45 million • 1927: The first “talkie” movie, The Jazz Singer, is produced, signaling the end of silent movies • Edward Hopper paints Manhattan Bridge • Aaron Copland’s Concerto for Piano and Orchestra premieres in a performance by the Boston Symphony Orchestra • The Iron Lung is developed by P. Drinker and L. A. Shaw • Charles Lindbergh makes the first nonstop, solo flight across the Atlantic Ocean; he flew from New York City Paris in 33 hours and 29 minutes • The Harlem Globetrotters basketball team is organized by Abe Saperstein • 1928: The Kellogg-Briand Pact is signed in Paris as an international treaty that provides for “the renunciation of war as an instrument of national policy” • C. G. Jung publishes Relationships between the Ego and the Unconscious • Walt Disney produces the first Mickey Mouse films • George Gershwin composes An American in Paris • Alexander Fleming discovers penicillin • The first scheduled television broadcasts are held by WGY in Schenectady, New York • Amelia Earhart is the first woman to fly across the Atlantic Ocean

Coolidge lighted the first national Christmas tree in 1923 on the White House lawn.

Coolidge was well known for his New England thriftiness and was horrified to learn that the White House required repairs totaling almost half a million dollars. He refused to allow the work be done until circumstances demanded it. When the ceiling above the family quarters began to buckle, Coolidge ordered the repairs be made. He and his family then moved out of the White House in 1927 for six months so that the extensive remodeling and repairs could take place. During this time, Coolidge met with the architect and contractor to inspect the attic. The architect showed the president the extreme damage that had occurred to the rafters when the White House was burned during the War of 1812. The architect insisted that the rafters be replaced and asked whether the new rafters should be wood or steel beams, which would cost more. Coolidge replied, “All right. Put in the steel beams and send the bill to the King of England.”

Coolidge’s brevity of words is legendary and earned him the nickname “Silent Cal.” In one anecdote, a dinner guest made a bet that she could get him to say more than two words. When she told the president of her wager, he replied, “You lose.”

When Coolidge died the American writer Dorothy Parker cracked, “How do they know?”

This library and museum houses all the Coolidge vice-presidential and presidential papers and thousands of pieces of related memorabilia.

Set in the Vermont Hills, the town of Plymouth Notch is a historic district featuring a cluster of buildings including the birthplace and early home of President Coolidge, a community dance hall that once served as the summer White House, and other exhibits relating to his life and presidency. 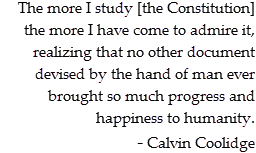