“I grew up in Boardman, Ohio and attended Kent State University in 1976.  After two additional years of graduate work, I moved to Perugia, Italy where I worked for a year as a graphic designer and part-time illustrator. Then it was off to Chicago where I’ve been ever since. Most of the work I do currently is in the children’s book market.”

What To Do With a Box by Jane Yolen (Creative Editions)

I Met a Dinosaur by Jan Wahl (Creative Editions)

Catching the Moon by Myla Goldberg (Arthur A. Levine) 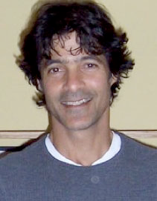