Emily Arnold McCully writes: “I have been a children’s book author for forty-two years, first as an illustrator, then as writer/illustrator. My childhood clearly prepared me for my career—I spent my time reading, sketching, play-acting, writing (and, as I recommend schoolchildren do to stimulate bodies as well as their brains) playing ball, bike riding and climbing trees.

“A powerful interest in American history was instilled in me very early. My parents both had a strong connection to Galesburg, Illinois, where I was born. The family library contained many volumes of local history and the career of Abraham Lincoln. He was practically a favorite son of the city, which had been an important stop on the Underground Railway and host of a Lincoln-Douglas debate. My mother took me to Washington when I was about eight and we toured the White House. Lincoln remains my favorite President because of his probity, courage, and sense of humor. The suffragists hold a special place in my heart. I’ve written a book about Elizabeth Cady Stanton and another about Margaret E. Knight, who had to prove in court that her female brain had produced an important invention.

“I also wrote about the girls who made the early textile mills run. Usually I try to unearth forgotten heroines or look at events from a new angle. I continue to read widely in history and that reading gives me most of my ideas (i.e., for further reading, followed, sometimes, by writing). In college and graduate school I studied art history. My other life pursuits all have some relationship to picture-book making. I acted in many college plays (and wrote some). In middle age I got the chance to perform in two Equity productions, one off-Broadway. I have also published two adult novels. I involve myself energetically in politics, read, attend plays and movies, garden, play tennis, and travel. My two sons are a linguist and software designer and a drummer. It is my good fortune to live in both New York City and the Hudson Valley.”

Queen of the Diamond: The Lizzie Murphy Story (Farrar, Straus and Giroux)

Clara: The (Mostly) True Story of the Rhinoceros Who Dazzled Kings, Inspired Artists, and Won the Hearts of Everyone … While She Ate Her Way up and down a Continent! (Schwartz & Wade Books) 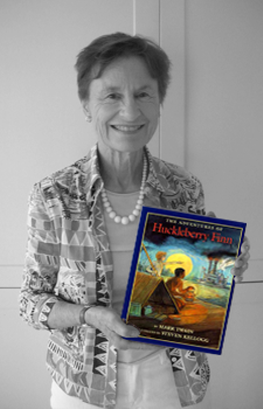 Author and illustrator
Emily Arnold McCully recommends The Adventures of Huckleberry Finn by Mark Twain as a Great Read for ages 12 and up. Check out more Great Reads on thencbla.org.