From White House Hostess to American Powerhouse: The Evolution of the First Lady’s Title and Role

First Lady Jacqueline Kennedy loathed her new title so much that upon stepping foot in the White House she immediately informed the chief usher that the staff should simply call her “Mrs. Kennedy.” To her, the title “first lady” was degrading and sounded “like a saddle horse.” Though Mrs. Kennedy detested her new title, the titles bestowed upon our presidents’ wives from the moment Martha Washington assumed the role have always reflected the societal expectations Americans thrust upon them. Although many of America’s presidential wives have transformed their roles beyond anything Mrs. Washington might possibly have dreamed, the title “first lady” remains in our vocabulary as a stalwart reminder of gender roles and expectations best left in the past.

Had Martha Washington been handed a guidebook with a title like Everything You Always Wanted to Know About Being the President’s Wife, she undoubtedly would have devoured it in an instant. As the wife of America’s very first president, Mrs. Washington had no such etiquette manual in which to seek advice nor did she have any role models to emulate. She was indeed on untrodden ground. Although the Washingtons endeavored to shun the European trappings and traditions of royalty, Mrs. Washington clung to such regal practices as curtseying and allowed herself to be called “Lady Washington” in her new role as America’s most prominent woman. She stepped into the spotlight unwillingly at first, but eventually embraced her role as a public figure and shaped a formal position for herself that focused on coordinating social functions and hosting official state events. Mrs. Washington thereby set the initial standards for what has continued to be a highly visible and formal role. Abigail Adams followed in Mrs. Washington’s footsteps by maintaining the ceremonial responsibilities, but she also tread her own path by serving as an active political advisor to her husband. Mrs. Adams’ influence on the president prompted many to dub her “Mrs. President.” Dolley Madison sashayed into her role as primary White House hostess accompanied by a natural instinct for gracious entertaining and was thrilled to serve not only during her husband’s administration, but also during that of the widowed Thomas Jefferson. As the grand dame of Washington society, the vivacious Mrs. Madison was exalted by many as “Lady Presidentress.” Such grandiose titles were abandoned following the election of the first log cabin president Andrew Jackson in 1829, whose populist campaign launched a rising tide of democratic values that spurned formalities and promoted a more sincere focus toward humility. Presidential wives were no longer given titles, but simply called “Mrs. Jackson” and “Mrs. Harrison.” Thus, the designated titles assigned to the wives of America’s presidents, as well as the duties executed by them, have both evolved dramatically over the years beginning with the ambiguous role and expectations imposed on Martha Washington and culminating with the most ambitious of objectives pursued by Eleanor Roosevelt and Hillary Rodham Clinton.

President Zachary Taylor is attributed with coining the title “first lady” when he eulogized Dolley Madison as “our First Lady for a half century” in 1849. Americans did not embrace the title, and subsequent use of “first lady” throughout the nineteenth century was mostly sporadic. In 1860 “first lady” made its way into print in a periodical titled Illustrated Newspaper as a means to describe Harriet Lane, the adopted niece of President James Buchanan who served as White House hostess for her bachelor uncle. The following year two other newspapers referred to Ms. Lane’s successor, Mary Todd Lincoln, as “First Lady.” The title remained obscure until the years following the Civil War, when one newspaper referred to Julia Grant as “First Lady” and another called Lucy Hayes “First Lady of the land.” Usage of “first lady” did become commonplace by the beginning of the twentieth century, but it was not until the title was proclaimed from the stage (in the 1911 play The First Lady in the Land, which celebrated Dolley Madison, and the 1935 political comedy First Lady) that “first lady” became firmly embedded in the American lexicon and the title of choice for identifying the president’s spouse. Usage of the title continued to expand into the 1960s, when many applied it outside the White House to powerful women in their respective professions, as well as to the wives of state governors. Although Jacqueline Kennedy and other presidents’ wives have disliked the designation “first lady,” the title continues to signify not only the American president’s wife, but also the wives of other international leaders.

Strong Women Aspire to Break the Barriers of Expectations

The first ladies began to peer beyond the wall of expectations thrust on them and break the barriers of their traditional social duties in the twentieth century when progressive women like Helen Taft and Lou Hoover recognized a goldmine of opportunities inherent in their unique positions. Both women exploited their standing to advocate for disenfranchised groups such as immigrants, factory workers, and women. In 1933 Eleanor Roosevelt raised the bar of expectations into the stratosphere for future first ladies by completely transforming the role into a position focused on communication, social activism, and political partnership. As a woman with a vision and an independent mind, Mrs. Roosevelt dedicated herself to ambitious campaigns aimed at expanding basic human rights not only at home, but also abroad. Though a number of Mrs. Roosevelt’s predecessors had actively advised their husbands, including Abigail Adams and Edith Wilson, none had served as the president’s partner as publically as Mrs. Roosevelt. Mrs. Roosevelt not only spoke on her husband’s behalf at the Democratic National Convention, she also traveled the globe as a presidential ambassador and served in an appointed government position as the director of the Office of Civil Defense.

Mrs. Roosevelt’s unprecedented activist role plunged her into a maelstrom of constant controversy. Many Americans were simply not ready to see a woman play such a powerful role on the national stage, particularly a role with no legal definition or authority. Many of Mrs. Roosevelt’s successors subsequently chose to pursue a traditional role as hostess and wife supporting their husbands and families within the shadows of the political limelight. However, Mrs. Roosevelt’s work had opened meaningful new opportunities for others to not only advocate for humanitarian and charitable causes, but to also voice their own opinions regarding key issues and policies. Of course, the storm winds continue to swirl around first ladies who boldly express their own opinions and take leadership roles. The fact of the matter remains, though, that despite the absence of any legal job description for the role of first lady, Americans expect them to work and to do so for no pay. The first ladies of the last quarter century—perhaps glancing over their shoulders to the legacy of Mrs. Roosevelt—have increasingly sought to perform political work more openly by supporting policy initiatives important to them and serving as their husband’s political partner. Regarding the increasing power of America’s first ladies, Robert P. Watson writes in The Presidents’ Wives: Reassessing the Office of First Lady, “It is becoming the rule . . . that the first lady has surpassed the vice president and [other senior advisers] in terms of visibility and perhaps even power and influence both in and out of the White House.”

From “First Lady” to “Madame President”

“Vote for me and get two for the price of one” was the promise made by Bill Clinton on the campaign trail in 1992, implying that his wife Hillary—an experienced lawyer who had continued her career during Clinton’s tenure as governor of Arkansas—would work for Americans as hard as he would. And work she did. Mrs. Clinton served not only as a close presidential adviser, but also as leader of the committee charged with overhauling healthcare. Mrs. Clinton’s determined efforts advocating for universal healthcare, as well as for children’s issues and women’s rights around the world, whet her appetite for a higher-level role in public service. During her husband’s last year as president, Mrs. Clinton blazed a completely new trail by becoming the first first lady to run for and win public office, that of senator for New York. Mrs. Clinton proved her political ambitions did not end as senator, however, and she ran an historic and compelling race for the Democratic presidential nomination in 2008. Though Mrs. Clinton was not the first woman to seek our nation’s highest office—that distinction belongs to Victoria Woodhull who ran for president as the nominee of the Equal Rights Party in 1872—Mrs. Clinton was the first to launch a viable campaign and to win a presidential primary. Though Mrs. Clinton conceded the party nomination to her competitor Barack Obama, her revolutionary campaign awakened the imaginations of Americans from all walks of life and triggered a profound paradigm shift that has forced us all to believe that a woman can finally one day be called “Madame President.” That paradigm shift has supported not only Mrs. Clinton’s return to the campaign trail as she seeks the Democratic nomination in 2016, but also the presidential bid of another female candidate, Republican Carly Fiorina.

As the second term of President Obama comes to a close, so does the tenure of his wife, First Lady Michelle LaVaughn Robinson Obama—another presidential spouse who arrived in the White House with her own Ivy-league law degree and extensive career experience. Mrs. Obama inspired many, not only by serving as the nation’s first minority first lady, but also by advocating for a number of critical issues, such as healthy lifestyles and support for America’s service members and veterans, all while working in her self-declared primary role as “mom-in-chief” to the Obama’s two daughters, Malia and Sasha.

And so today, as the nation prepares to transition to a new administration that very possibly may be led by a female chief executive, we need to reconsider the role of the presidential spouse. Would a president’s husband be expected to host Girl Scouts for tea in the White House Rose Garden? What type of activist roles would a husband play? And what would we call him? “First gentleman,” perhaps? Watson writes that the title “First Lady” is due for a change: “The term lady is almost never used in day-to-day conversation, in print, or even in formal settings, especially in the United States. It is a dated phrase that conjures up images of a privileged aristocracy and the Old World. In such cases, the term lady carried with it a set of expectations, including that of refraining from any sort of political activity. Moreover, it seems that the title Presidential Spouse or First Spouse or even terms such as Presidential Mate or Presidential Partner not only are more appropriate descriptions of the office but may soon by necessity replace the title First Lady.” Our powerhouse first ladies have indeed demonstrated their mettle and their capacity to serve our nation as effectively as our male presidents. All presidential spouses—male and female—deserve a more appropriate and modern title.

For more information about the first ladies, go to the “First Lady Fact Files.”

Angelo, Bonnie. First Families: The Impact of the White House on Their Lives. New York: HarperCollins, 2005.

“Michelle Obama has her own transition to work out.” 10 November 2008.
<http://ap.google.com/article/ALeqM5gF6i4iEHstfMbiVDziPEgI7m6pFAD94C20HO1> 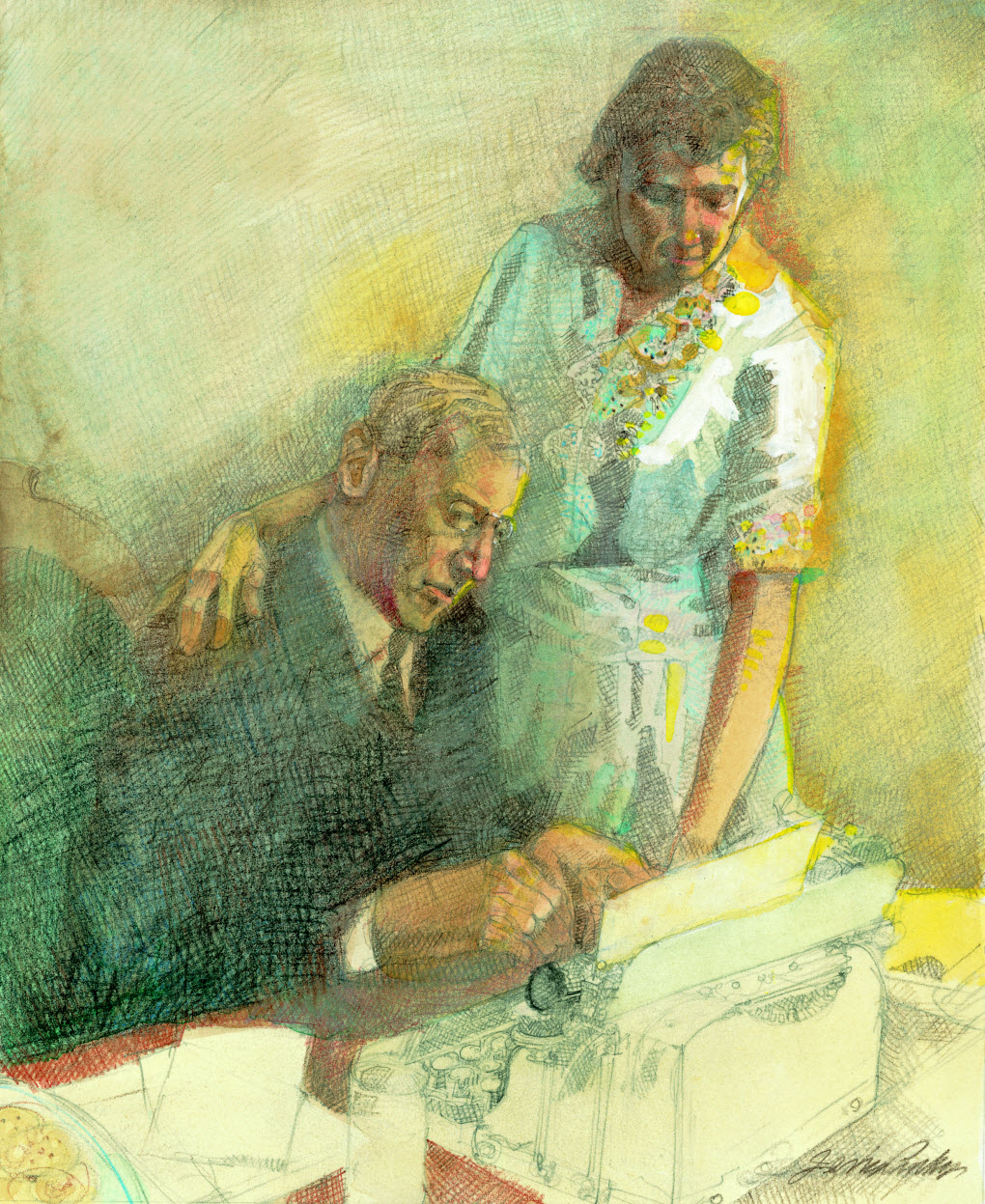