George Herbert Walker Bush became president with one of the most qualified resumes of anyone who had ever been elected. Bush served as a Navy pilot during World War II; gained industry experience managing an oil development company; and also served in the House of Representatives, as the U.S. ambassador to the UN, and as Director of the CIA. Bush also had eight years of on-the-job training as Reagan’s vice president.

Bush’s presidency was consumed with foreign affairs. Bush maintained friendly relations with Soviet President Mikhail Gorbachev throughout the end of the Cold War. He commented in later years, “I hoped it would end but I wasn’t sure it would end that fast. I wasn’t sure the [Berlin] wall would come down. I wasn’t sure Germany would be unified. I wasn’t sure that the Soviet Union would have dramatically imploded as it did.”

In 1989 Bush ordered troops into Panama to overthrow the corrupt dictator, General Manuel Noriega. Noriega surrendered and was brought to the U.S. to stand trial on charges of cocaine trafficking, racketeering, and money laundering. He was convicted in April 1992 and sentenced to 40 years in prison, but that sentence was later reduced to 30 years.

In 1990 the leader of Iraq, Saddam Hussein, invaded the neighboring country of Kuwait and threatened to invade Saudi Arabia as well. Hussein refused to withdraw, and Bush organized an international military coalition to force Iraq out of Kuwait. After six weeks of bombing, the American-led “Operation Desert Storm” successfully rid Kuwait of the Iraqi invaders. Bush’s successful leadership in conducting the Persian Gulf War provided him with the highest approval ratings of any president in the history of the Gallup polls.

On the domestic front, Bush is credited with gaining passage of the Americans with Disabilities Act and the Clean Air Act. He also signed the Earth Pledge, which limited emissions of greenhouse gases and required environmentally friendly development. However, the U.S. economy slumped into recession and Bush was forced to renege on his campaign promise of “no new taxes.” Despite his considerable achievements internationally, Bush was not elected to a second term.

Regarding his upbringing, Bush has stated, “People say I was a man of privilege and by that they mean money, but I was privileged in the question of values––a mother and father who were determined to help their kids be good people.”

“Make no mistake, a new breeze is blowing across the steps and the cities of the Soviet Union. Why not, then, let this spirit of openness grow, let more barriers come down.” (May 12, 1989)

“Our objectives in the Persian Gulf are clear, our goals defined and familiar: Iraq must withdraw from Kuwait completely, immediately, and without condition. Kuwait’s legitimate government must be restored. The security and stability of the Persian Gulf must be assured. And American citizens abroad must be protected.” (September 11, 1990)

Bush was the first vice president to be elected president since Martin Van Buren.

Following his graduation from prep school, Bush joined the Navy and became the youngest pilot to fly in World War II. He flew more than 50 combat missions, and on September 2, 1944, his plane was shot down. Bush was the sole survivor and was almost captured before being rescued by an American submarine. He was awarded the Distinguished Flying Cross for his bravery.

The Bush library is an academic research institution and is part of the Texas A&M Campus. The museum has extensive exhibits devoted to Bush’s life of public service and his presidency. 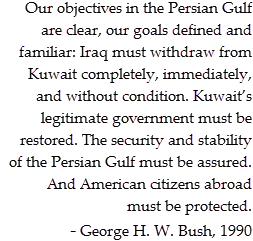