Bush’s parents are George H. W. and Barbara Pierce Bush. His father was the 41st president. Bush married Laura Welch in 1977. They have twin daughters, Barbara and Jenna.

George W. Bush won the presidency in an extremely controversial race against the Democratic candidate Al Gore. In fact, at the end of the day on November 7, 2000, the votes were so close that no winner could be declared. A recount of Florida’s hotly contested votes ended after the Supreme Court ruled 5 to 4 on December 13 to stop the count. In the end Gore had won the popular vote, but Bush had won the Electoral College, making Bush the president.

Throughout his presidential campaign, Bush had promised to cut taxes. Upon taking office, he quickly ushered through a series of significant tax cuts and tax breaks. The measure exempted millions of Americans from paying any taxes, created a new lower bracket for the working poor, and also lowered the top three brackets. Bush also worked successfully to gain bipartisan support of comprehensive education reforms via the No Child Left Behind Act. Though many remain skeptical about the long-term effects of No Child Left Behind, the legislation broke new ground by introducing accountability measures to ensure continued improvements in reading and math proficiency.

Despite this initial focus on domestic policy initiatives, Bush’s presidency was taken in a dramatically different direction by an unexpected and devastating blow on the morning of September 11, 2001. On that date––what we now remember as 9/11––the U.S. fell victim to the worst terrorist attack in our history. The Islamist terrorist group al-Qaeda hijacked four passenger airliners and used them to execute a coordinated series of suicide attacks against the World Trade Center in New York City and the Pentagon. Over 3,000 people from over 90 different countries lost their lives. Bush quickly rallied the American people and accepted sincere condolences from leaders and people around the globe. Bush also declared an international “War on Terror” to prevent future atrocities. Immediate goals of the War on Terror were to overthrow the Taliban, destroy al-Qaeda, and to capture Osama bin Laden.

The War on Terror has progressed as military action that began in Afghanistan in October 2001. The U.S. military and its allies successfully removed the Taliban from control of the country and drove most elements of al-Qaeda into hiding in the mountainous region between Afghanistan and Pakistan. Bush then turned his attention toward Iraq. In October 2002, he presented Congress with a resolution authorizing him to invade Iraq if Saddam Hussein did not surrender its arsenal of weapons of mass destruction. Although United Nations inspectors did not find such weapons, Bush argued that Iraq presented a threat to the U.S. because such weapons did exist, and because of the connection between Iraq and al-Qaeda. The U.S. launched a preemptive invasion of Iraq in March 2003 and accomplished its initial military objectives within the first six weeks. In subsequent months and years, however, an insurgency formed in Iraq that proved difficult and costly to counter. The insurgency caused thousands of deaths among American soldiers and many more deaths among Iraqi civilians.

The War on Terror and the Iraq War dominated the Bush presidential agenda following 9/11. Many existing federal government agencies were combined into the new Department of Homeland Security, a single federal department created with the primary mission to protect the homeland against terrorist threats. Bush has also secured passage of such legislation as the USA Patriot Act, which strengthened the abilities of law enforcement to prevent, investigate, and prosecute acts of terror.

After the invasion of Iraq, no weapons of mass destruction were found, and eventually the Iraq – al-Qaeda connection was discounted. For these reasons, as well as because of the mounting American deaths caused by the insurgency, the Iraq War caused controversy for the rest of Bush’s two terms in office. The controversy featured prominently in both the 2004 and 2008 presidential elections. Bush ran for re-election against the Democratic nominee, Senator John Kerry, in 2004. Even though many Americans disagreed with Bush’s handling of the war, many also were uncomfortable electing a new president in wartime. Bush was therefore re-elected to a second term. Shortly after his reelection, Bush launched new domestic policy initiatives, such as Social Security and immigration reform, but without success. During his two terms Bush has had both the highest and the lowest domestic Gallup poll approval ratings of any American president, ranging from around 90% immediately after the September 11 attacks to a low of 28% in April 2008.

“Today, we affirm a new commitment to live out our nation’s promise through civility, courage, compassion and character.” (Inaugural Address; January 20, 2001)

In the wake of September 11, Bush addressed a joint session of Congress and the American people at the U.S. Capitol: “We have seen the state of our Union in the endurance of rescuers, working past exhaustion. We have seen the unfurling of flags, the lighting of candles, the giving of blood, the saying of prayers––in English, Hebrew, and Arabic. We have seen the decency of a loving and giving people who have made the grief of strangers their own. My fellow citizens, for the last nine days, the entire world has seen for itself the state of our Union––and it is strong.” (September 20, 2001)

Bush addressed the world regarding the invasion of Iraq: “We will pass through this time of peril and carry on the work of peace. We will defend our freedom. We will bring freedom to others, and we will prevail.” (March 19, 2003)

Bush grew up with a passion for sports, but baseball was always his favorite. As a young Little League player, Bush particularly admired the superstar Willy Mays. When his family moved to Houston, his parents built a baseball diamond in the backyard for Bush and his siblings to play with friends. In high school Bush played on both the junior varsity basketball and baseball teams, but he usually spent more time on the bench than on the court and field. Later in high school he became a cheerleader and enjoyed leading the squad at football and baseball games. After his college years, Bush bought a partial share of the Texas Rangers baseball team and worked as the managing general partner for five years. As an owner, he was privileged to attend practices, talk to the players, and sit by the dugout at games. His Texas friend Dr. Charles Younger has remarked about Bush’s baseball management experience, “George loves people and baseball, so he traveled to all 254 counties in Texas, promoting the Texas Rangers. I think owning the Texas Rangers was his happiest time in life. And going to all those counties was good preparation for his future political career.”

MillerCenter.org/president/gwbush
Biographical information, essays, and access to Bush’s presidential speeches sponsored by the Miller Center at the University of Virginia.

The George W. Bush Presidential Library and Museum “serves as a resource for the study of the life and career of George W. Bush, while also promoting a better understanding of the Presidency, American history, and important issues of public policy. The Library and Museum accomplishes its mission by preserving and providing access to Presidential records and other donated collections, hosting public programs, creating educational initiatives, preserving artifacts, and producing innovative museum exhibits.” 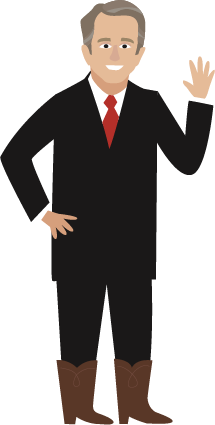 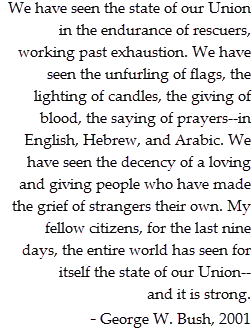