Washington’s parents were Augustine and Mary Ball Washington. Washington married the widowed Martha Dandridge Custis in 1759. They had no children together, but Martha had two children from her former marriage: John Parke Custis and Martha Parke Custis. Mrs. Washington was a grandmother by the time she became first lady.

Washington is well remembered for his critical role as Commander-in-Chief that helped win the American Revolution, but his legacy as “Father of Our Country” was sealed with his selection as First President. Washington’s character and vision for the country enabled him to set balanced standards for leadership so that he could carry out the will of the people, rather than reign like a king. Soon after his inauguration, Washington wrote, “I walk on untrodden ground. There is scarcely any part of my conduct which may not hereafter be drawn into precedent.”

As the first president, Washington created the presidential cabinet and also selected the location for the new capital city. When war broke out between France and Britain, Washington remained neutral and was later criticized during his second term for not taking a position.

“I hope I shall always possess firmness and virtue enough to maintain the character of an Honest Man.” (1788)

“The proposed Constitution . . . is provided with more checks and barriers against the introduction of Tyranny . . . than any Government hitherto instituted among mortals.” (1788)

At his inauguration, Washington stated, “This Constitution is really in its formation a government of the people . . . in which all power is derived from and, at stated periods, reverts to them. . . . It is purely a government of laws, made and executed by the fair substitutes of the people alone. . . [The American form of government is] a new phenomenon in the political and moral world, and an astonishing victory gained by enlightened reason over brute force.”

“Against the insidious wiles of foreign influence . . . the jealousy of a free people ought to be constantly awake; since history and experience prove that foreign influence is one of the most baneful foes of Republican Government.” (1796)

Washington became a national hero after his success at the Battle of Trenton. Striking unexpectedly became a hallmark of his war strategy, and on Christmas night 1776 he led his 2,400 troops across the icy Delaware River to surprise the Germans who had aligned with the British. This battle helped pave the road to victory over the British in 1781.

Washington was the only president to be elected by a unanimous vote.

Washington never lived in the White House, although he chose its actual site, selected the architect, and oversaw the beginning of the building process.

Upon his death, Congress made this tribute: “First in war, first in peace, first in the hearts of his countrymen.”

At this birthplace and earliest childhood home of Washington, the visitor can experience the recreation of an 18th century colonial plantation. It is decorated with period furniture, including a table thought to be original to the Washington family. Also on site is a cemetery where many of Washington’s family lie interred.

The childhood home of our first president, Washington inherited the property upon the death of his father. It is the site of the famous cherry tree legend.

Washington’s home for 45 years, he inherited the estate and enlarged both the house and the acreage over the years. The house and outbuildings have been restored to their appearance in 1799, the year Washington died. His tomb is also on the property. 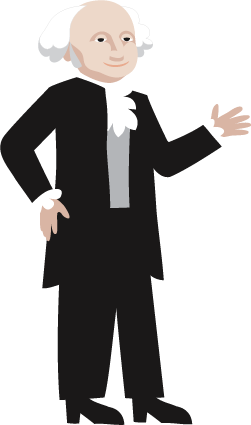