Gigi Amateau is the author of Chancey of the Maury River (Candlewick), and A Certain Strain of Peculiar, a Bank Street College Best Children’s Book of the Year. She loves reading about the Early Republic era in American history, riding horses in the mountains, gardening with native plants, birding, and watching VCU basketball (#letsgovcu).

Gigi Amateau collaborated with her daughter Judith to write “Wanted: Magnanimous, Exquisite Woman!” for Our White House: Looking In, Looking Out. At the time, Judith Amateau was an honors student at an all-girls’ high school. She is a passionate reader, an accomplished equestrian, a skilled marksman, and a Virginia-champion pie baker.

Gigi Amateau writes: “In our family, political discussions take place about every time somebody takes a sip of water. Wherever we are—in the car, at the dinner table, folding laundry— we find a way to turn any old thing into a political talk. Corn, cows, horses, sidewalks, bridges, sunshine, music, books—you get the picture; everything is political! We might get the names or dates wrong, but we never let those details stop us from being passionately committed to our point of view.

“What we tried to do with this piece was to represent a typical sassy discussion in our home, which often involves agreeing then disagreeing, pushing then pulling, but always with lots of loving. This particular discussion about women in the White House involved many family members over several hours. The entire discussion couldn’t be easily represented here, which is why we chose to include the Exquisite Corpse exercise. For example, the line caring enough to thrash young men who would blow smoke in your face bubbled up from a really tender story that my husband told us while we are all talking about women in the White House at the dinner table.

“Under the first Clinton Administration, my husband and his buddy were White House interns at the sweet age of nineteen. I didn’t know either of them back then, but being a great admirer of both men, I imagine them at that age being very cute and very cocky in that young, lovable way. One winter night it was snowing hard in D.C. and the two boys were standing outside the old executive office building without coats, smoking cigarettes, when the First Lady and her Secret Service detail breezed by them. She started to step into her limo, but then spun around, and marched back to these shivering babies blowing smoke rings in their shirt sleeves. With great kindness, but in a very firm, maternal voice, Hilary Clinton lectured those boys about smoking until her security people finally pulled her away. She also told them to get their coats on. My husband—by the way, his name is Bubba—has never forgotten that she cared enough to bless him out. He did quit smoking several years ago.”

Gigi lives with her family in Virginia. “Wanted: Magnanimous, Exquisite Woman!” is her first collaborative work with her daughter. 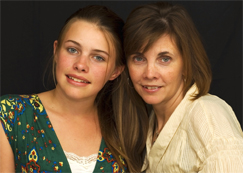