Hoover was president for less than a year when the stock market was seized by the most devastating crash in American history, plunging the U.S. into the period known as the Great Depression and initiating an international economic crisis. The consequences of the crash were devastating as businesses went bankrupt, banks failed, and millions became unemployed. People lost their homes, farmers lost their land, and many lost their life savings. By the end of 1930 more than 1,300 banks had closed across the country. Ultimately the Great Depression witnessed the failure of 10,000 banks and the loss of $2 billion in deposits. Nearly five million Americans were out of work by January 1931. Unfortunately, the economic situation continued to deteriorate and by 1933 nearly 13 million people were unemployed.

In the days following the crash, Hoover announced his intention to maintain a balanced budget, but to also cut taxes and increase public works spending as a means of providing employment. Though Hoover attempted to rally the people, he firmly believed that providing direct aid to the destitute was not the job of the federal government. Rather, he believed that local communities should take charge of administering assistance to those in need.

Hoover did intervene, however, through the creation of the Reconstruction Finance Corporation (RFC) in January 1932, an independent federal agency authorized to lend money to rebuild the U.S. economy. The RFC distributed $1.5 billion by the end of 1932 in the form of aid to state and local governments and loans to banks, railroads, farm mortgage associations, and other financial institutions. The RFC also lent money for public works projects, such as hydroelectric plants and toll bridges, that would eventually pay for themselves.

Many blamed Hoover for the Depression, and he was easily beaten by Franklin Roosevelt in the following election. Today many historians believe that Hoover could not possibly have solved the economic crisis, though he might have eliminated human suffering by authorizing direct relief.

In the years following his presidency Hoover continued to serve the public through appointments by President Truman and President Eisenhower. Most notably Hoover served as chairman of a commission charged with recommending ways to streamline government, known as the Hoover Commission.

When he accepted the Republican nomination for president in 1928, Hoover predicted that “We in America today are nearer to the final triumph over poverty than ever before in the history of any land.”

About the presidency, Hoover commented, “The office in such times as these makes its incumbent a repairman behind a dike. No sooner is one leak plugged up than it is necessary to dash over and stop another that has broken out. There is no end to it.”

“Every time the government is forced to act, we lose something in self-reliance, character and initiative.”

1929: The stock market crashes October 24, which triggers the Great Depression • William Faulkner writes The Sound and the Fury • The Museum of Modern Art opens in New York and exhibits works by Cezanne, Gauguin, Seurat, and Van Gogh • U.S. aviator Richard E. Byrd and three companions fly over the South Pole • The Bell Laboratories in the U.S. experiment with color television • The St. Valentine’s Day Massacre occurs, in which six notorious Chicago gangsters are machine-gunned to death by rivals • Construction begins on the Empire State Building in New York • 1930: The movie All Quiet on the Western Front, the first major anti-war film of the sound era, wins the Academy Award for Best Picture • Grant Wood’s painting American Gothic is exhibited for the first time at The Art Institute of Chicago and causes a sensation; it is awarded a $300 prize • The planet Pluto is discovered by C.W. Tombaugh • Comic strips become very popular in the U.S. • The U.S. population is now 122 million • In 1900 the population numbered only 76 million • 1931: Pearl S. Buck’s novel The Good Earth is a best seller • Robert Frost’s Collected Poems wins the Pulitzer Prize • Salvador Dali paints the fantastic The Persistence of Memory • “The Star-Spangled Banner” becomes the national anthem • Mrs. Hattie T. Caraway, a Democrat from Arkansas, becomes the first woman to be elected to the Senate • 36 million cars are produced world wide each year • The Empire State Building is completed • 1932: The Reconstruction Finance Corporation is established • Aldous Huxley publishes his dystopian novel Brave New World • The Folger Library opens in Washington • Cole Porter’s musical The Gay Divorcee is produced on Broadway and stars Fred Astaire • Amelia Earhart is the first woman to fly solo across the Atlantic from Newfoundland to Londonderry, Ireland • Japan begins to conquer world markets by undercutting prices • The Olympic Games are held in Los Angeles, and 37 nations participate • The winter games are held in the U.S. for the first time in Lake Placid, New York • Unemployment is rampant: over 13.7 million are unemployed in the U.S. , and 30 million are unemployed worldwide • Construction begins on the Golden Gate Bridge

Hoover was the first president who was born west of the Mississippi River. When he was only two years old, he became severely ill with the croup, which is an infection of the upper airway that is characterized by a loud, barking cough. During the worst of his illness, the young Hoover’s breathing had slowed to such a degree that his parents were unable to find his pulse and thought he had died. They subsequently put pennies over his eyelids and covered his body with a sheet. Fortunately, his uncle was a doctor, and he arrived just in time to revive him. Just four years later when Hoover was six, his father died. His mother died when he was nine. He eventually went to live with the uncle who had saved him, Dr. John Minthorn.

During the years before his presidency, Hoover often helped direct food and humanitarian aid in the U.S. and abroad. Following the German invasion of Belgium during World War I, Hoover was asked to supply the Belgian people with food. His success led President Wilson to appoint Hoover as head of the Food Administration, where he continued the task of providing food around the world. When Soviet Russia was overwhelmed by famine in 1921, Hoover offered assistance. One critic questioned whether such food relief would bolster Bolshevism. Hoover responded, “Twenty million people are starving. Whatever their politics, they shall be fed!”

The Herbert Hoover National Historic Site features Hoover’s birthplace cottage and boyhood home, and the Presidential Library and Museum. The small frame schoolhouse where Hoover attended primary grades has been moved to the site—it was also used as a Friends meeting house and was attended by the Hoover family.

Not a library in the traditional sense, this library is a repository for Hoover’s papers and historical materials and is available only to scholars and researchers. The museum is devoted to Hoover’s life of public service. 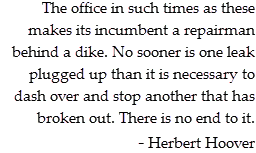