The most basic, the most important and effective means you have in a democracy to voice your beliefs and to choose a better future for yourself and your children is your vote. Your vote as an individual, your vote added to others’ votes, is the first defense against apathy and futility and the best stand for hope and human progress. Educate yourself, and the young people you live with and work for, about voting rights and the presidential electoral process. Inform yourself about national and local issues and national, state, and local candidates. Share multiple informational sources with your children, discussing issues and candidates. Most importantly, share the presidential election process with your children, then take your children with you when you vote—showing them how much you care about them and their future!

Here you will find information to help you explain the presidential electoral process to the young people in your life, as well as ideas and activities to excite them about the process.

Race to the Ballot: The Our White House Presidential Campaign and Election Kit for Kids!
✓  Includes NEW and Revised Content for 2020!
Get young people excited and engaged in the presidential election using this all-in-one resource containing exclusive articles, activities, and discussion questions you can use at home, in the classroom, at camp, and even on the go.

2020 Presidential Election Calendar
Find out all the dates for this year’s debates, caucuses, primaries, and national conventions.

Separate Fact from Fiction: Analyze the Campaign Rhetoric
Help kids learn to think critically when reading and listening to the statements, speeches, and debates of presidential candidates so they can get to the truth.

A Long and Winding Road: Steps to Becoming a Presidential Nominee
Review the historical background and explanation of how candidates become their party’s nominee for American president through caucuses and primaries.

Choosing Sides: The Rise of Party Politics
Both George Washington and John Adams despised the idea of political parties, but our two-party system took root during Washington’s administration anyway.

The Donkey and the Elephant
Discover how an insult, a war phrase, and graphic humor contributed to the donkey and the elephant becoming two of America’s most iconic political symbols.

Links for National Political Parties
Explore the platforms of America’s political parties using these direct links to their websites.

Persuading the People: Campaigning for President
From simple slogans to well-choreographed speeches, presidential campaigns—past and present—demonstrate an uncanny willingness to do almost anything to persuade the people.

From Buttons to Pins: Campaign Tokens Evolve
Our earliest presidents did not actively campaign in the style we now associate with presidential campaigns, but they and their supporters did wish to commemorate their inaugurations with souvenirs.

Getting the Votes and Getting Elected: The Popular Vote vs. The Electoral College
Americans vote for a new president every four years, on the first Tuesday after the first Monday in November. Following the long, grueling months of advertising, primaries, conventions, and debates that make up modern presidential campaigns, Americans at last go to their polling places to make their voices heard.

From Peas to Paper to Web Portals: The Evolution of the Ballot in America
Although the method of casting a vote in America has evolved dramatically since our country’s early days, the ballot—whatever its form—remains critical to our right to vote and our democratic process.

The Second Shall Be First: The 1948 Presidential Election—Truman V. Dewey
The 1948 presidential election witnessed incumbent Harry S Truman defy the odds—and the media—in a stunning win over his Republican opponent Thomas E. Dewey.

Presidential Debates: Watch the Debates with Your Kids and Teens!
Tips for watching and discussing the debates with your kids so you can engage them in the presidential elections.

Campaign and Election Activities and Discussion Questions
The race to the White House is on! Grab your students’ attention and captivate them with campaign and election tactics, rhetoric, and processes. 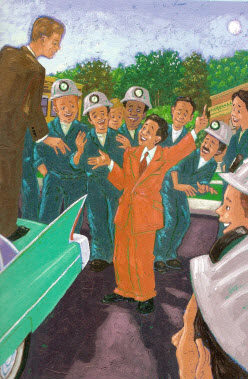