For more than two hundred years, since the first Inauguration of George Washington in New York City in 1789, Americans have witnessed the oath of office ceremonies of the president and vice president. As stated on the U.S. Department of State website, “The U.S. presidential inauguration embodies a unique bipartisan tradition, and even the most heated partisan political debates are set aside to honor the peaceful transition of power.”

All three branches of government—executive, legislative, and judicial—come together at the Inauguration. The chief justice of the U.S. Supreme Court administers the Oath of Office at the U.S. Capitol, where Congress meets. Both major political parties are involved in planning the event.

Editor’s Note: The NCBLA has always encouraged the adults who live and work with young people to engage their kids in current events by watching and discussing them. This year the FBI is warning everyone about the potential for armed protests in Washington, D.C. and all 50 state capitals in the days leading up to and including Inauguration Day. With the possibility for violence at hand, we recommend that educators and parents proceed cautiously in their decisions about whether to watch the inaugural activities live this year. A possible alternative is to share the inauguration video with young people later in the day with sensitivity as needed. This can be managed by video recording the events or by finding them on news streaming services.

In addition, the ongoing COVID-19 pandemic has required major changes to inaugural activities. The Joint Congressional Committee on Inaugural Ceremonies has announced that the 2021 inauguration will be orchestrated mostly as a virtual event with no large public gatherings. President Biden and Vice President Harris will be sworn in at the West Front of the Capitol as is traditional. Other events will take place across the country and be broadcast on television and online.

This new interpretation of the inaugural activities provides a perfect educational opportunity for young people, teachers, and parents to COMPARE and CONTRAST how inaugural events were organized in the past to how they will be organized this year when our nation is experiencing a public health crisis. We encourage you to use these materials in creative ways to maximize their educational impact with the young people in your lives.

Our White House Inauguration Celebration Kit for Kids!
✓  Includes NEW and Revised Content for 2021!
Trigger your students’ interest in the presidency by digging into this all-in-one resource containing exclusive articles, activities, games, and discussion questions you can use at home, in the classroom, and at community meetings.

Why Are Presidential Inaugurations Held on January 20th?
Presidents need time between the election and their inauguration to organize their cabinet and make plans for their government—but not too much time. The Twentieth Amendment ushered in a swifter transition.

The Presidential Oath of Office
The words “I do solemnly swear” are known to every American. Discover the history of the presidential oath of office and its accompanying ceremony.

Americans Love a Parade: The History of Presidential Inaugural Parades
From the moment Washington journeyed from his home at Mount Vernon escorted by enthusiastic supporters to his inauguration, the American people have honored their new presidents with festive parades.

United by Voice and Vision: Thomas Jefferson’s First Inauguration, March 4, 1801
Thomas Jefferson’s inaugural address was delivered in “so low a tone that few heard it,” but the volume of the day proved explosive otherwise.

Come One, Come All! How Technology Transformed Inauguration Day
The lack of social media did not prevent throngs of Americans from attending George Washington’s inauguration, but today’s technology does enable citizens who are unable to travel to Washington, D.C. the ability to witness history in the making from afar.

Inaugural Activities and Discussion Questions
Spark your students’ creative energy and utilize their thinking caps as you share these fun projects and discussion topics for understanding and engaging in presidential inaugurations past and present. 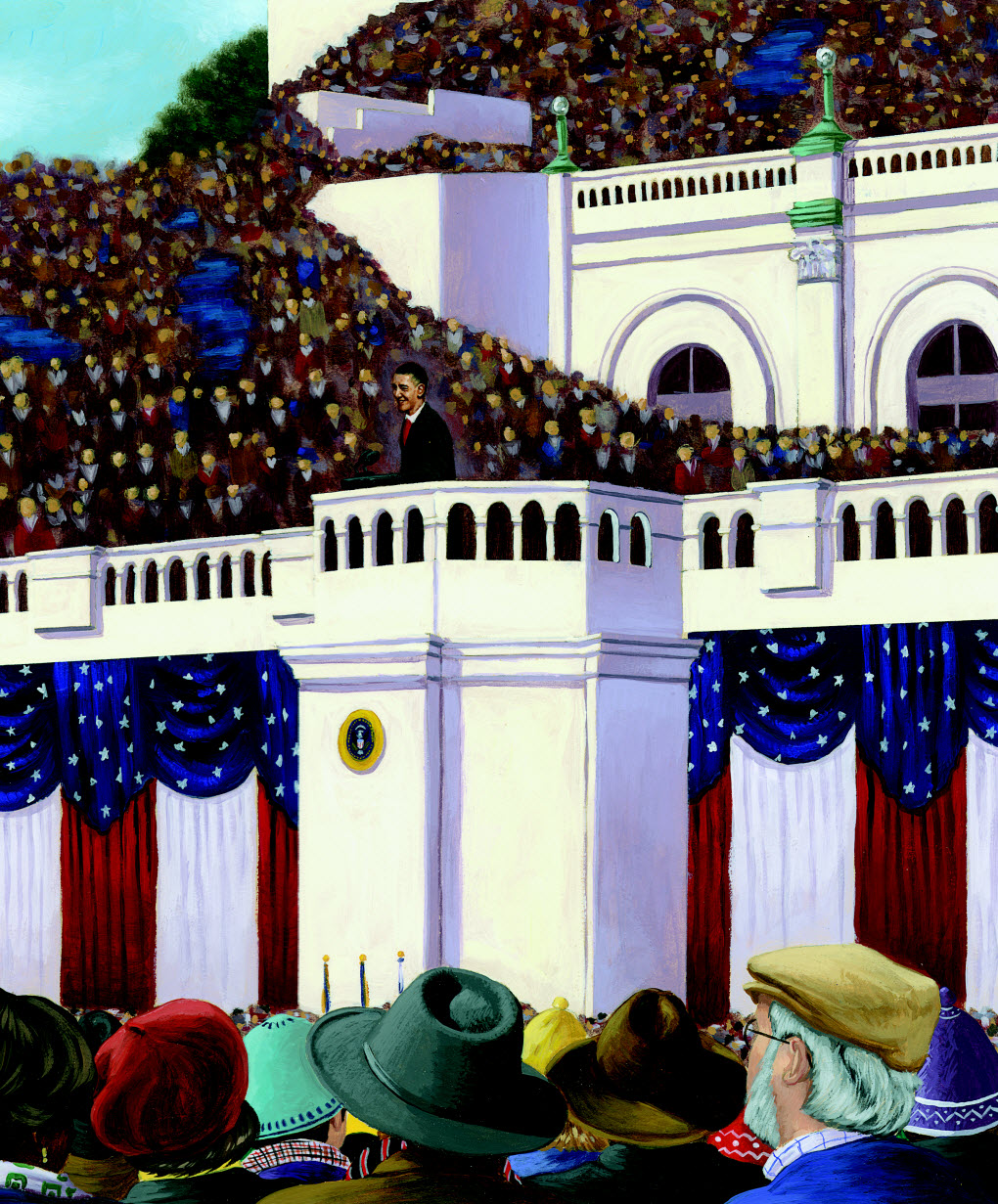 OUR WHITE HOUSE. Illustration © 2008 by A. G. Ford. Reproduced by permission of the publisher, Candlewick Press, Somerville, MA.