Although Jack Prelutsky is best known for his humorous and imaginative verse, his readers are now discovering how deeply music is entwined with his poetry. Currently, Jack is more likely to appear on a concert stage than in a library or bookstore.

While Jack has been making words rhyme for over forty-five years, his career began as a folk singer in coffeehouses and with uncertain aspirations of becoming an operatic tenor. By chance he took his first poems, descriptions of fanciful creatures, to Susan Hirschman, editor at Macmillan. Susan suggested that he write about real animals and with her encouragement, Jack’s first book, A GOPHER IN THE GARDEN, was published in 1967.

Since then he has published over seventy books of poetry, including THE NEW KID ON THE BLOCK; HOORAY FOR DIFFENDOOFER DAY!; THE DRAGONS ARE SINGING TONIGHT; AWFUL OGRE’S AWFUL DAY; SCRANIMALS; THE FROGS WORE RED SUSPENDERS; IF NOT FOR THE CAT; WHAT A DAY IT WAS AT SCHOOL!; and BEHOLD THE BOLD UMBRELLAPHANT.

In 2006, the Poetry Foundation designated Jack as the nation’s first Children’s Poet Laureate.

Jack’s latest books are: THE SILVER MOON; STARDINES SWIM HIGH ACROSS THE SKY; I’VE LOST MY HIPPOPOTAMUS; THE CARNIVAL OF THE ANIMALS; MY DOG MAY BE A GENIUS; PIZZA, PIGS & POETRY: how to write a poem (Jack’s first book of prose); and BE GLAD YOUR NOSE IS ON YOUR FACE AND OTHER POEMS. In his role as anthologist, Jack has compiled several collections, beginning with THE RANDOM HOUSE BOOK OF POETRY FOR CHILDREN, continuing with THE 20TH CENTURY CHILDREN’S POETRY TREASURY, and most recently, READ A RHYME, WRITE A RHYME. 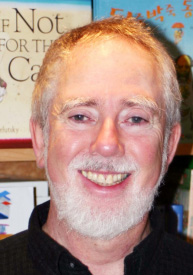