Buchanan’s parents were James and Elizabeth Speer Buchanan. Buchanan was the first bachelor to become president. He never married and had no children of his own. However, his niece, Harriet Lane, was orphaned at age eleven, and he raised her.

Although Buchanan supported a legal recognition of slavery, he found it to be morally “evil.” When he took office the country remained dangerously divided between pro- and anti-slavery states, and he hoped to ease tensions. The increasingly precarious situation was further inflamed, however, just two days into his term with the Supreme Court’s Dred Scott decision. The court declared that slaves and their descendents were property, not citizens. Furthermore, the court declared that the government could not dictate a white citizen’s right to own slaves based on where he lived. As a result, Northerners vowed to fight the decision and Southerners threatened to secede.

The Democrats did not re-nominate Buchanan for a second term, and upon Lincoln’s election in 1860, the southern states began to secede one by one. Buchanan believed that it was illegal for states to secede, but also impossible for the federal government to prevent them from doing so. As an attempt to solve the crisis, he proposed Constitutional amendments protecting slavery in the South, but they did not pass. He ultimately left behind a country at the brink of civil war.

Regarding slavery, Buchanan stated, “I believe it to be a great political and a great moral evil. I thank God, my lot has been cast in a state where it does not exist. But . . . I know it is an evil at present without a remedy . . . one of those moral evils from which it is impossible for us to escape without the introduction of evils infinitely greater.”

“The Constitution . . . expressly recognizes the right to hold slaves as property in states where slavery exists. This, then, is not a question of general morality, affecting the consciences of men, but it is a question of constitutional law. . . . The southern states have rights guaranteed to them, and these rights I am determined to maintain, come weal, come woe.”

Buchanan was a lame duck upon leaving office, and he declared to the newly elected Lincoln, “If you are as happy on entering the White House as I on leaving, you are a very happy man indeed.” (1861)

Buchanan is the only president who never married. He had raised his orphaned niece Harriet Lane, and she went to the White House with him to act as White House hostess. “Hal” was extremely popular and earned the nickname “The Democratic Queen.” Many people believed that as a bachelor Buchanan would be lonely living in the White House, so they sent him pets, including a pair of bald eagles and a Newfoundland dog.

In 1860 Buchanan received the first Japanese delegation (a group of sixty ministers) to ever visit the U.S. They brought a variety of opulent and unusual gifts, such as embroidered saddles, swords, kimonos, and a cabinet that Buchanan later placed in the Green Room.

A stone pyramid marks the site of the cabin where President James Buchanan was born—the cabin itself was moved to the grounds of Mercersburg Academy.

Built in 1828, Wheatland was home to James Buchanan from 1848 to his death in 1868. Furnished with Buchanan’s original possessions and furnishings, the home once served as Buchanan’s campaign headquarters and the front porch was the site of his first campaign address. 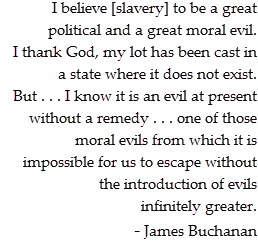