The Children’s Book Council named James E. Ransome as one of seventy-five authors and illustrators everyone should know. Currently a member of the Society of Illustrators, Ransome has received both the Coretta Scott King Award for Illustration and the IBBY Honor Award for his book, The Creation. He has also received a Coretta Scott King Honor Award for Illustration for Uncle Jed’s Barbershop which was selected as an ALA Notable Book and is currently being shown as a feature on Reading Rainbow. How Many Stars in the Sky? and Sweet Clara and the Freedom Quilt were also Reading Rainbow selections. PBS’s Storytime featured his book, The Old Dog. Ransome has exhibited works in group and solo shows throughout the country and received The Simon Wiesenthal Museum of Tolerance award for his book, The Wagon. In 1999 Let My People Go received the NAACP Image Award for Illustration and Satchel Paige was reviewed in Bank Street College of Education’s “The Best Children’s Books of the Year.” In 2001, James received the Rip Van Winkle Award from the School Library Media Specialists of Southeast New York for the body of his work.  How Animals Saved the People received the SEBA (Southeastern Book Association) Best Book of the Year Award in 2002 and the Vermont Center for the Book chose Visiting Day as one of the top ten diversity books of 2002.  In 2004 James was recognized by the local art association when he received the Dutchess County Executive Arts Award for an Individual Artist.  He has completed several commissioned murals for the Children’s Museum in Indianapolis, The National Underground Railroad Freedom Center in Cincinnati, Ohio, and the Hemphill Branch Library in Greensboro, NC. He created a historical painting commissioned by a jury for the Paterson, NJ Library and a poster for the 50th Anniversary Celebration of Brown vs the Board of Education.  His traveling exhibit, Visual Stories, has been touring the United States since 2003.  His work is part of both private and public children’s book art collections.

Just a Lucky So and So: The Story of Louis Armstrong by Lesa Cline-Ransome (Holiday House) 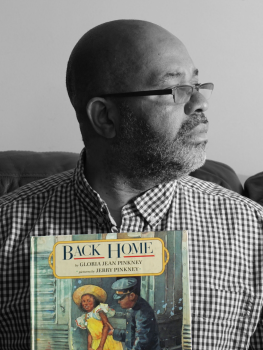 Author and illustrator James Ransome recommends Back Home (Dial Books for Young Readers, 1992), written by Gloria Jean Pinkney and illustrated by Jerry Pinkey, as a Great Read for ages 3-8. Check out more Great Reads on thencbla.org.