Jane Dyer writes: “As a child, I preferred rainy days because it meant I could stay inside and draw, read, or daydream. I also liked to play dress-up, as well as dress up my dog and cat. I would pretend to send them to school, and I would teach them my favorite subjects—reading, writing, art, and history. There was no math since I seem to recall spending a great deal of time looking out the window and daydreaming during this subject while at my actual school. Eventually, I went on to become a teacher of kindergarten and second grade. (And I did teach math; it wasn’t so bad.) It was my students’ parents, along with family and friends, who convinced me that I should illustrate children’s books.

”Many years later, I have illustrated almost fifty books. I always spend many hours researching my subjects, whether it is Goldilocks and the three bears; Piggins, the British butler who solves crimes; or Victoria Woodhull, who was the first woman to run for president in 1872. It is my hope that all my viewers feel as if they could crawl into one of my pages and inhabit that world, whether real or imaginary.

“I still like to draw and daydream, but now I get to put those ideas into my books and, to the relief of my dog, only dress animals on paper. It is as if every day were a rainy day and I get to stay inside and color. I have two daughters who are now grown up, but the greatest joy was being able to be at home working on what I loved with them often by my side.

“I am honored to be a part of this book, particularly since I was asked to illustrate the entry by Linda Byrd Johnson. I had the pleasure of meeting her while she was visiting the Eric Carle Museum of Picture Book Art near where I live and found her to be gracious and charming. I was sent a photo of her from 1967 (I believe I had the same hairstyle at the time), by the publisher of this book, Candlewick Press, along with a photo of the White House lawn. In addition, I did a Google search of the White House and pressed ‘images.’

“I have been to the White House twice. Once when my daughters were young I was asked to paint an Easter egg, which is a tradition. We were then invited to participate in the Easter Egg roll. The painted eggs were displayed on the lawn in glass cases.

“Years later I was asked to read at the Easter Egg roll. I got to meet Steven Kellogg when I was there. We had breakfast together at the White House and then I was thrilled to watch him “talk and draw” at the event. I also brought my twin sister along and we got a tour of the White House. My favorite First Lady was Jackie Kennedy who was in the White House when I was in middle school. In my younger days, people used to tell me I looked like her, so I had my sister take a picture of me in front of her portrait. The truth came out—I don’t look like her. But I, along with most Americans, marveled at her grace and beauty.”

All We Know, written by Linda Ashman (HarperCollins)

A Woman for President: The Story of Victoria Woodhull (Walker Books)

A Smile So Big, written by Kathleen Able (Harcourt) 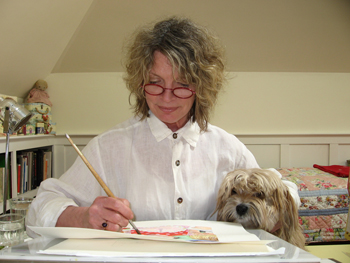