Tyler had not sought the executive office and was at his home in Virginia when a clerk arrived to break the news of President Harrison’s death. Tyler had originally been a Democrat, but later became a Whig. Being a southern Whig ensured southern votes, which was the primary reason he had been selected to run with President Harrison. The Democrats were angered that Tyler had switched sides, and the Whigs also disliked him because he most often sided with the Democrats. The Constitution was unclear regarding the nature of such a transfer of power. Tyler insisted that he intended to assume all presidential powers and authorities. As a result, all of President Harrison’s cabinet resigned, except for Secretary of State Daniel Webster who chose to remain so that he could continue his work in negotiating a treaty with the British. A year into his term, Tyler vetoed a tariff bill, which led a House committee to report that Tyler had misused the veto power and to introduce an impeachment resolution. However, the resolution did not pass.

Despite many differences with both parties, Tyler was able to enact positive legislation, such as the Log Cabin Bill. This bill encouraged settlers to move farther west across the Mississippi by providing them with public land at a minimal price. Any head of a family, widow, or single man over 18 years old could claim a tract of public land totaling 160 acres by building a log cabin on it and then later paying the federal government only $200 to finalize the sale. Tyler is also credited with negotiating a trade agreement with China and also settling a boundary dispute with Canada through the Webster-Ashburton Treaty,

Tyler’s last action as president was to create a treaty that would annex Texas. The uncooperative Senate delayed action until Tyler’s term was ended, thus transferring the credit to Polk.

During his first meeting with the existing cabinet, Tyler stated, “I am very glad to have in my Cabinet such able statesmen as you. But I can never consent to being dictated to as to what I shall or shall not do. . . . I am the President. . . . When you think otherwise, your resignations will be accepted.”

Regarding his first days on the job as the unelected president, Tyler stated, “When I arrived here, or within a day or two after, I became fully apprized of the angry state of the factions towards each other . . . I was surrounded by Clay men, Webster men, Antimormons, Antimasons, original Harrisonians, old Whigs and new Whigs, each jealous of each other and all struggling for the offices.”

On the annexation of Texas, Tyler noted, “Was there ever a clique of such unprincipled men? . . . Their love of office is their controlling passion. In despite of them however we shall leave the government sound and prosperous, and if the annexation of Texas shall crown off my public life, I shall neither retire ingloriously nor be soon forgotten.”

1841: The first wagon train of 69 pioneers crosses the Rocky Mountains on the Oregon Trail. By 1845 over 5,000 people had journeyed to the new lands of California and Oregon • 1844: China and the U.S. sign the first treaty of peace, amity, and commerce • Ralph Waldo Emerson publishes Essays • Samuel Morse’s telegraph is used for the first time between Washington and Baltimore

Tyler was the first vice president to gain the presidency upon the death of the sitting president and was subsequently nicknamed “His Accidency” by critics.

About mid-term during his presidency, Tyler sent his son Bob to speak to the railroad superintendent about engaging a train. The superintendent was a devout Whig who explained that he did not run special trains for presidents. Bob questioned him, “Didn’t you furnish a special train for the funeral of General Harrison?” The superintendent candidly replied, “Yes. And if you will bring your father here in that shape, you shall have the best train on the road!”

The longest frame house in America, President Tyler bought this house in 1842 and lived there until his death. It has been continually owned by the Tyler family, but is open to the public. 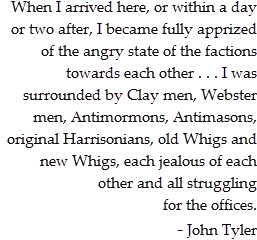