Lee Bennett Hopkins has written and edited numerous award-winning books for children and young adults, as well as professional texts and curriculum materials. He has taught elementary school and served as a consultant to school systems throughout the country.

Born in Scranton, Pennsylvania, Hopkins graduated Kean University, Bank Street College of Education, and holds a Professional Diploma in Educational Supervision and Administration from Hunter College. In 1980 he was awarded an honorary Doctor of Laws degree from Kean University.

In 1989 he received the University of Southern Mississippi Medallion for “outstanding contributions to the field of children’s literature” in recognition of his work; 2009 brought him the National Council of Teachers of English (NCTE) Excellence in Poetry for Children, recognizing his aggregate body of work. In 2010 he received the Florida Libraries’ Lifetime Achievement Award.

In addition to his anthologies, his own works include:

His creativity is the result of his passion for poetry and his unflagging belief that poetry is a necessity for children, at home and in the classroom.

His award winning series of American History through poetry for children and young adults includes:

Sky Magic (Dutton, 2009) received a starred review in The Horn Book, which called the anthology “mesmerizing…a hypnotic, otherworldly feel.” Sharing the Seasons (McElderry Books, 2010), illustrated by David Diaz, was starred in Kirkus and ALA Booklist.

At the heart of all his writing is the dedication to bringing children and books together. “You must teach children to love books,” he insists.”

One of the nation’s most sought-after speakers on the subject of children’s literature, Mr. Hopkins lives in Cape Coral, Florida. 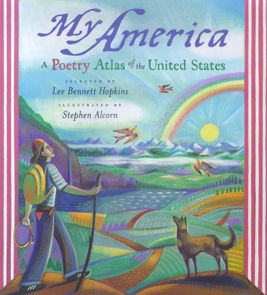