Lions and Tigers and Bears, Oh My! Wild Animals at the White House

* This article is intended for young people in grades 3-5. Adults may print copies for students to read to themselves or in small groups.

The White House isn’t just the home of our president and his family. Going all the way back to Thomas Jefferson, the White House has been the home for many animals too. After all, it’s a perfect place for a pet. What animal wouldn’t enjoy roaming around a 132-room house and romping on a giant, lush lawn?

Presidential pets have come from a number of different sources. There have been many presidents who chose pets because they were animal-lovers. Sometimes a friend or world leader gave an animal as a gift to the president. Animals also resided at the White House for practical reasons. For example, before automobiles were invented, many presidents had horses for transportation.

While we mostly hear about dogs, there have been other animals living at the White House too . . . wild animals . . . lions and tigers and bears, oh my!

Abraham Lincoln (16th President, 1861-1865) and his family took care of many animals, including a pig, a rabbit, ponies, cats, and dogs. The president’s sons Tad and Willie especially loved their goats Nanny and Nanko. The boys would tie carts or kitchen chairs to the goats and race them around the White House, sometimes interrupting formal receptions. When a live turkey arrived at the White House for Christmas, Tad named him Jack. The two became quick friends. When Tad learned Jack was destined for the dinner table, he interrupted a cabinet meeting and begged his father to save the turkey. Being a great animal-lover, President Lincoln spared the turkey. Perhaps Lincoln inspired President George H. W. Bush; he issued the first official presidential pardon for a Thanksgiving turkey in 1989, starting a new tradition at the White House.

Andrew Johnson’s (17th President, 1865-1869) pets found him. When Johnson discovered a family of mice in his bedroom, he didn’t set traps like some people would. Instead he took care of them, leaving them a basket of flour by the fireplace every night. He told his Secretary William Moore, “The little fellows give me their confidence and I give them their basket and pour upon the hearth some water that they might quench their thirst.”

Theodore Roosevelt (26th President, 1901-1913) and his family also loved animals and had plenty of them at the White House, including a zebra, a parrot, bears, a lion, a hyena, a coyote, rats, and a one-legged rooster. The president’s daughter Alice had a garter snake named Emily Spinach. Imagine bumping into Alice at a party with a snake slithering out of her pocketbook! Roosevelt’s son Quentin also caused quite a stir with animals in the White House. Once when his brother Archie was sick, Quentin tried to cheer him up by bringing the family pony up the elevator and into his room for a visit.

Herbert Hoover (31st President, 1929-1933) had two pet alligators that belonged to his son Allan. Sometimes the president allowed them to wander around the White House. It must have been quite a shock turning a corner and catching a glimpse of those sharp teeth!

Thomas Jefferson (3rd President, 1801-1809) received some unusual pet presents when he sent several expeditions out west to explore some land the U.S. had just purchased from France. He asked them to send back some samples of what they found. They didn’t just send plants; Captain Zebulon Pike sent two grizzly bear cubs. When they outgrew their cages, they roamed around the White House lawn with the peacocks, partridges, and mockingbirds. Jefferson’s favorite pet, however, was his mockingbird Dick. Jefferson’s good friend Margaret Bayard Smith described how the bird would land on Jefferson’s table and “regale him with its sweetest notes, or perch on his shoulder and take its food from his lips. Often when he retired to his chamber it would hop up the stairs after him.”

Martin Van Buren (8th President, 1837-1841) received a pair of tiger cubs as a gift from the Sultan of Oman. President Van Buren wanted to keep the cubs, but Congress insisted they belonged to the people. Eventually the president donated the tigers to the zoo.

Calvin Coolidge (30th President, 1923-1929) had a small zoo at the White House, which included a bear cub, two lion cubs, a wallaby, an antelope, pekin ducks, and Billy the pygmy hippopotamus. He also received a raccoon as a gift to be served as part of Thanksgiving dinner. But President Coolidge grew fond of the raccoon and called her Rebecca. He let her roam up and down the halls and took her for walks on a leash around the White House gardens. She never made it to the dinner table, except perhaps as a guest.

Pets That Earned Their Keep

President Taft (27th President, 1909-1913) brought his own cow Mooly Wolly to the White House because he loved fresh milk. He later replaced Mooly with Pauline, who allegedly produced 7 1⁄2 gallons of milk a day. She was the last cow to live at the White House.

Woodrow Wilson (28th President, 1913-1921) bought a flock of sheep and had them graze on the White House lawn. Not only did it save them from mowing, but he sold the wool from the sheep to raise money for the Red Cross during World War I.

You can tell a lot about a person by his pets. For example, Andrew Johnson was sensitive and Woodrow Wilson was a practical man. What can you learn about a person who chooses a bird as a pet? How about a lion? A tiger? A bear? Learning about the animals that have lived at the White House teaches us not only about our presidents and their families but also about what life at the White House must have been like.

If you were president, what kind of pet would you have and why? What would you name it? Would it serve an important purpose? Where would your pet live in the White House? 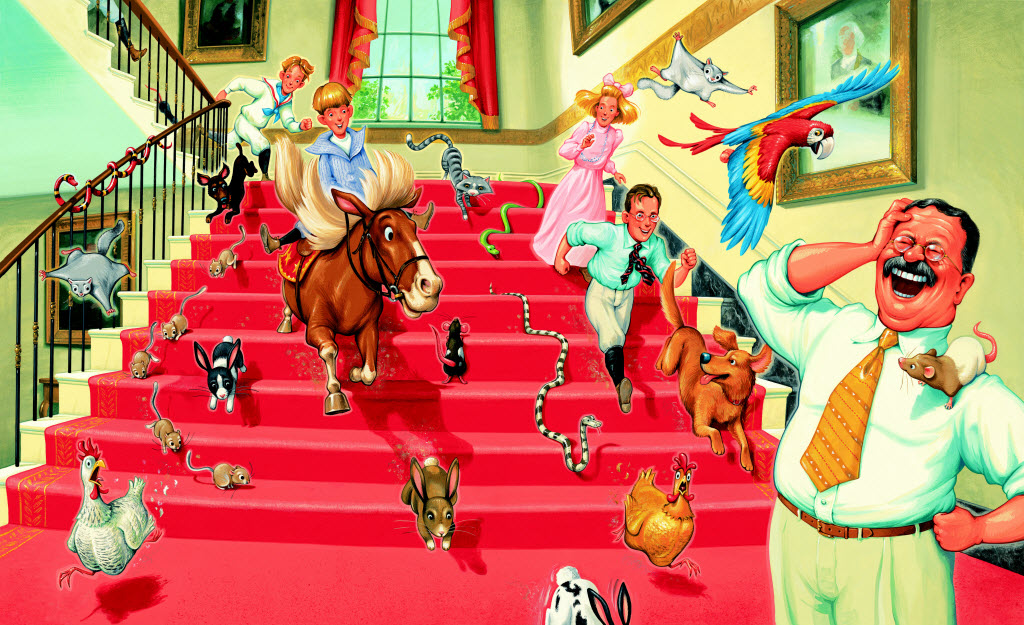