The tragic shooting of President Kennedy elevated Johnson into the presidency. Johnson promised to not only continue Kennedy’s work, but to also implement his own vision for America, which he called “The Great Society.” To realize this dream, he declared an “unconditional war on poverty” and also promised to end racism, asserting that “This is not merely an economic issue or a social, political, or international issue. It is a moral issue.”

Johnson wasted no time. He soon signed the Civil Rights Act of 1964 that ended segregation in schools, work sites, and public places. He also signed the Economic Opportunity Act, which created the Office of Economic Opportunity––an umbrella agency designed to provide job training, adult education, and loans to small businesses. The EOA also implemented such programs as Volunteers In Service To America (VISTA), the Job Corps, Head Start, and Family Planning centers, all conceived to confront unemployment and poverty directly. Almost a year later he signed legislation that instituted government-funded healthcare for the elderly and disadvantaged in Medicare and Medicaid. Johnson is also credited with signing environmental legislation to guarantee clean air and water. Many Americans prospered under Johnson’s programs, and he won the 1964 election overwhelmingly.

Two clouds cast dismal shadows over Johnson’s Great Society and presidency. The first was the ongoing struggle for civil rights. Despite new antipoverty and antidiscrimination legislation and programs, massive unrest and rioting swept the nation. Martin Luther King Jr. led marches and demonstrations that inspired many, but riots continued and King was murdered in 1968.

The Vietnam War served as a second source of anxiety. President Kennedy had sent U.S. military advisors to South Vietnam in 1961, but in 1964 Johnson had asked Congress to engage in the war. Johnson believed Communism to be a severe threat, and he was committed to preventing a Communist takeover in South Vietnam. By 1966 the U.S. had sent almost 400,000 soldiers to Vietnam. Only 109 Americans had died in Vietnam before Johnson took office, but by the end of his term, over 30,000 Americans had died. Americans became increasingly disgusted with the war, and Johnson’s popularity plummeted. Therefore, in March of 1968, Johnson announced that he would not seek reelection to the presidency. He retired to his ranch in Texas.

In his first address to Congress as president, Johnson stated, “All I have I would have gladly given not to be standing here today. The greatest leader of our time has been struck down by the foulest deed of our time. . . . An assassin’s bullet has thrust upon me the awesome burden of the presidency. On the 20th day of January, in 1961, John F. Kennedy told his countrymen, ‘ . . . let us begin.’ Today, in this moment of new resolve, I would say to all my fellow Americans, let us continue.” (November 27, 1963)

“The promise of America is a simple promise: Every person shall share in the blessings of this land. And they shall share on the basis of their merits as a person. They shall not be judged by their color or by their beliefs, or by their religion, or by where they were born, or the neighborhood in which they live.”

“The women of America represent a reservoir of talent that is still underused. It is too often underpaid, and almost always underpromoted.” (Remarks at the Federal Woman’s Award Ceremony at the White House; March 2, 1965)

1964: The 24th Amendment to the Constitution is ratified, abolishing poll taxes • In March Jack Ruby is convicted of the murder of Lee Harvey Oswald and sentenced to death • Johnson signs The Civil Rights Act of 1964 • In August three civil rights workers are found dead in Mississippi • Congress passes the Gulf of Tonkin Resolution giving the President power to pursue military action in Vietnam • In August Johnson signs the Economic Opportunity Act, creating the Office of Economic Opportunity and beginning the War on Poverty • Martin Luther King Jr. is awarded the Nobel Peace Prize • Khrushchev is forced to resign as leader of the Soviet Union and is replaced by Leonid Brezhnev • The Beatles arrive in New York for their first U.S. tour • 1965: Nine American soldiers are killed in an attack on U.S. barracks in Pleiku, Vietnam, and Johnson begins bombing North Vietnam • Malcolm X is assassinated by other black Muslims in New York City • Martin Luther King Jr. leads a march from Selma to Montgomery, Alabama • Johnson signs the Elementary and Secondary Education Act • The U.S. Supreme Court finds a Connecticut law banning the use of contraceptives unconstitutional • In July Martin Luther King Jr. leads a demonstration in Chicago in an attempt to bring the Civil Rights Movement to the North • Johnson signs legislation creating Medicare and Medicaid. Johnson signs the Voting Rights Act into law • In August the Watts Riots break out in Los Angeles • Consumer advocate Ralph Nader publishes Unsafe at Any Speed • “Op” art (nonobjective art directed at optical illusions based on use of color, form, and perspective in unusual ways) becomes trendy • 1966: Fearing that American involvement in Vietnam will draw France into a world war, French president Charles de Gaulle announces that France will withdraw from NATO • The U.S. Supreme Court unanimously upholds the Voting Rights Act of 1965 • The White House Conference on Civil Rights urges Congress to pass further civil rights legislation • In Miranda v. Arizona, the U.S. Supreme Court rules that the constitutional provision against self-incrimination applies to police interrogations • Huey P. Newton and Bobby Seale found the Black Panther Party • Truman Capote writes In Cold Blood • The World Jewish Congress in Brussels attempts to promote Jewish-Christian understanding • Alfred Hitchcock produces his 50th film, Torn Curtain • The Soviet spacecraft Luna 9 and the American spacecraft Surveyor 1 land on the moon • Miniskirts become fashionable • 78 million cars are registered in the U.S • Color TV is widely available • 1967: A launch pad fire during tests for the Apollo program kills three astronauts • The 25th Amendment to the Constitution is ratified, providing rules of succession upon the death or incapacitation of the president, and enabling the president to appoint a new vice-president in the case of a vacancy • In July riots break out in Newark, New Jersey and later spread across Detroit, Michigan • Stanford University biochemists produce a synthetic version of DNA • China explodes its first hydrogen bomb • Dr. Christiaan N. Barnard performs the world’s first human heart transplant in South Africa • Mickey Mantle hits his 500th career home run • 1968: North Vietnamese troops surprise South Vietnamese and American troops by attacking during the Tet holiday • While the Tet Offensive is not a military loss for the U.S., it leads to a loss of confidence in the Johnson administration’s prosecution of the war • In March U.S. forces in Vietnam massacre hundreds of unarmed men, women, and children in the hamlet of My Lai • News of the massacre does not reach the public until November 1969 • Robert Kennedy enters the race for the Democratic nomination for president • In March Johnson announces a partial bombing halt and his unwillingness to seek reelection to the presidency • Martin Luther King Jr. is assassinated in Memphis, Tennessee • In May the U.S. and North Vietnam begin peace talks in Paris • On June 5 Senator Robert Kennedy is assassinated after winning the Democratic primary in California • The Soviet Union invades Czechoslovakia to end the movement toward greater freedom and independence • In November Leonid Brezhnev announces that the Soviet Union has the right to intervene anywhere in its sphere of influence • This “Brezhnev Doctrine” becomes central to Soviet foreign policy • Popular films include The Odd Couple starring Jack Lemmon and Walter Matthau, and Stanley Kubrick’s 2001: A Space Odyssey • James D. Watson publishes The Double Helix, which explains the discovery of the molecular structure of DNA • Violent crimes have increased 57% in the U.S. since 1960

Every member of Johnson’s family shared his “LBJ” initials: his wife (Lady Bird), his daughters (Lynda Bird and Luci Baines), and even the family dog (Little Beagle Johnson).

In June 1965 Johnson and his wife hosted a Festival of the Arts at the White House, which was the first festival of its kind sponsored by a president. The Johnsons had invited many principal artists, writers, and musicians to showcase a stunning variety of American visual, literary, and performance arts. The award-winning, African-American jazz singer Sarah Vaughan delighted the audience with a 30-minute performance. A White House staffer encountered Miss Vaughan sobbing in her dressing room following her performance. She explained, “Nothing is the matter. It’s just that twenty years ago when I came to Washington I couldn’t even get a hotel room, and tonight I sang for the President of the United States in the White House––and then, he asked me to dance with him. It is more than I can stand!”

Field Trips for Lyndon B. Johnson

The Johnson Library is a research facility with 45 million pages of documents from Johnson’s political career. In addition, there are photos and other media available for research. The museum exhibits a wide range of items related to the life and presidency of LBJ.

This historic site features a visitor center, the Behrens Cabin and the living history center, The Sauer-Beckmann Farm.

Comprised of the Johnson City District and the LBJ Ranch, the park provides a complete look at Johnson’s life—his birth and childhood, his political life, retirement, and his final resting place. 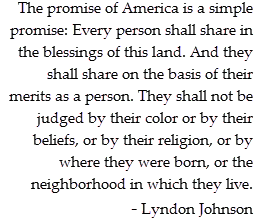