Matt Phelan is the illustrator of many books for young readers, including Flora’s Very Windy Day by Jeanne Birdsall, Always by Ann Stott, Xander’s Panda Party by Linda Sue Park, and The Higher Power of Lucky by Susan Patron, winner of the 2007 Newbery Medal. He is the author/illustrator of the graphic novel The Storm in the Barn, which won the 2010 Scott O’Dell Award for Historical Fiction. His second graphic novel Around the World received the 2012 Carolyn W.Field Award from the Pennsylvania Library Association and two Eisner Award nominations. His latest graphic novel, Bluffton, is about summertime, vaudeville, and the young Buster Keaton. It has been nominated for three Eisner Awards including Best Graphic Album. His first picture book, Druthers, was published in September 2014.

In 2014, Matt was awarded the Free Library of Philadelphia/Drexel University Children’s Literature Citation.

A word about President Herbert Hoover: “On researching Herbert Hoover I discovered a wealth of truly great accomplishments. I included none of these in my comic. For the sake of story and due to limited space, I chose to concentrate on how Hoover was commonly viewed by the public during his only term in office. Although he proposed many legislative measures to end the Depression, his reluctance to use the federal government to ease the suffering of the poor was considered callous. Ironically, before his presidency, he was perhaps best known for orchestrating food relief efforts for war-torn Belgium, East Europe, and Russia. Like all aspects of history, there are many grey areas worthy of further examination. No one can be summed up in four pages.”

“When researching this era,” he says, “I always spend hours looking through the amazing online photography collection of the Library of Congress.

The New Girl . . . and Me by Jacqui Robbins (Richard Jackson/Simon & Schuster)

The Storm in the Barn by Matt Phelan (Candlewick Press) 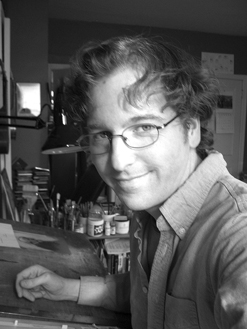