Melania married Donald Trump in 2005 and since then has volunteered her time and leadership for numerous arts and not-for-profit organizations, including the Martha Graham Dance Company; the American Red Cross, for which she served as the Goodwill Ambassador for four years; the Boys Club of New York; National Love Our Children Day; National Child Abuse Prevention month; and the American Heart Association, for which she served as Chairwoman in 2010. Mrs. Trump created the BE BEST awareness campaign for young people as her primary initiative as first lady. Its mission is “to focus on some of the major issues facing children today, with the goal of encouraging children to BE BEST in their individual paths, while also teaching them the importance of social, emotional, and physical health. BE BEST will concentrate on three main pillars: well-being, online safety, and opioid abuse.”

Mrs. Trump has one child with husband Donald, a son named Barron Trump, who lived with the President and the First Lady in the White House during the Trump administration and now resides with them in Florida.

Describing the purpose of her BE BEST initiative, Mrs. Trump has stated, “It remains our generation’s moral imperative to take responsibility and help our children manage the many issues they are facing today, including encouraging positive social, emotional, and physical habits….”

[Back to First Lady Fact Files] 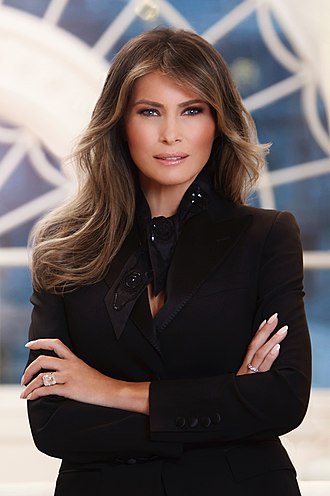