Writer Michael L. Cooper was born and raised in southeastern Kentucky. Cooper is the author of the Golden Kite Award winner Dust to Eat: Drought and Depression in the 1930s, as well as Fighting for Honor: Japanese Americans and World War II (both Clarion). He is a member of the Society of Children’s Book Writers and Illustrators, Author’s Guild, PEN, the Children’s Book Guild of Washington, D.C., and the Organization of American Historians.

Fighting Fire! Ten of the Deadliest Fires in American History and How We Fought Them (Holt, 2014)

Dust To Eat: Drought and Depression in the 1930s (Houghton Mifflin Harcourt, 2004)

From Slave to Civil War Hero: The Life and Times of Robert Smalls (Lodestar/E. P. Dutton) 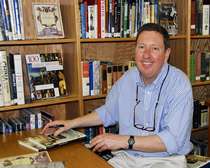