The magnificent blue spruce towers above the Ellipse, the ground between the White House and the Washington Monument. Throughout the year it is a silent reminder of yuletide pleasures and joy. Then in December the tree takes on new significance. Dressed in strands of colorful lights and trimmed with ornaments, the tree, our National Christmas Tree, becomes a beacon of beauty and brilliance.

The seed of this story does not begin with the first green sprouts of the spruce, nor the catalog from which the tree was ordered, but rather to a simple idea written in a letter and sent to the Secretary of the President in 1923.

Lucretia Walker Hardy, Director of the District of Columbia Community Center Department, sought permission to set up a community Christmas tree on the South Lawn of the White House. President Calvin Coolidge and First Lady Grace Coolidge approved, and within a few short weeks a site was secured and arrangements for an evergreen tree were made.

A forty-eight-foot balsam fir cut from the Green Mountains of Vermont, President Coolidge’s native state, was given to him as a gift from Middlebury College. The tree was loaded onto a special car and driven to the capital city where it was erected on the Ellipse, and strung with 3,000 white, red, and green electric lights.

At 5 p.m. on Christmas Eve in 1923, several thousand people circled round as President Coolidge walked from the White House and lit the first National Christmas Tree. The remainder of the night was filled with music, carols, and community togetherness, which set the tone of peace and good will for future ceremonies.

In later years living Christmas trees were planted in Sherman Plaza and Lafayette Park, both locations near the White House. The lighting ceremony passed to President Herbert Hoover and then to President Franklin Delano Roosevelt who, in 1941, requested a new National Christmas Tree be planted on the South Lawn of the White House to create a more intimate holiday gathering.

The tree lighting ceremony that year was especially memorable. Though the nation was in the grips of World War II, the South Lawn remained open to the public, and a surprise visit from British Prime Minister Winston Churchill lifted people’s spirits.

WWII raged on in 1942 and the city was cinched by wartime restrictions. Organizers of the National Christmas Tree event decided for the first time not to hold the tree lighting ceremony, but First Lady Eleanor Roosevelt opposed their decision. As a compromise, the Christmas Eve ceremony was held, but to conserve electricity, chimes were hung on the tree instead of lights. And in a show of community support, area school children collected old and new ornaments to help decorate the tree.

The annual lighting celebration continued on the South Lawn of the White House until 1954, when it returned to the Ellipse and became the “Christmas Pageant of Peace,” a three-week long winter festival, a tradition that continues today. President Dwight Eisenhower lit the National Christmas Tree as well as smaller Christmas trees along the newly designed “Pathway of Peace.” The path, which would eventually be lined with fifty-six trees (one for each state, the District of Columbia, and the five U.S. territories), led to nightly exhibits and entertainment, with the National Christmas Tree being the central attraction.

In 1973, President Richard Nixon received letters from concerned citizens and environmental groups pleading for him to end the cutting of large, beautiful trees, which had become the custom for nearly twenty years.

That year, a forty-two-foot living Colorado Spruce from northern Pennsylvania became the permanent National Christmas Tree. Unfortunately the tree withered under the Washington heat and within a few years had to be replaced.

In 1977, the National Park Service (NPS) searched 7,000 miles of American countryside over a period of nine months before they chose a thirty-four-foot Colorado spruce growing in Maryland not more than fifteen minutes away from the White House. Unfortunately, this new tree blew down in heavy winds the following January, 1978.

The NPS began another search and found the perfect tree in the front yard of Mr. and Mrs. Myers of York, Pennsylvania. It took a team of tree experts equipped with rope, chain, hog wire, a special burlap tarp, a crane, a backhoe, and ninety quarts of homemade soup three days to unearth the Colorado blue spruce and load it onto the tractor-trailer.

The living tree was transplanted to the Ellipse on October 20, 1978. Fortunately, the tree took root and thirty years later, stands steadfast in full view of the White House. Growing to a height of forty-two feet, the tree has weathered heat and storms, ice and wind, five presidents and decades of social and political change.

The tree has remained dark only twice since it was transplanted: in 1979, in a symbol of allegiance to the fifty American hostages in Iran, and in 1980 when the tree was lit for only 417 seconds, one second for every day the hostages were held.

The National Christmas Tree returned to a full spectrum of light in 1981, but due to security concerns, President Ronald Reagan lit the tree by a remote switch inside the White House, an act that would continue throughout his presidential term.

It wasn’t until 1989, a month after the Berlin Wall came down and renewed feelings of hope, democracy and world peace flooded the country that President George H.W. Bush and First Lady Barbara Bush reclaimed the tradition started by President Coolidge of lighting the National Christmas Tree among the people on the Ellipse.

Today our National Christmas Tree stands with quiet dignity, between the White House and the Washington Monument, a testament to an eighty-five-year tradition and a national symbol of peace and good will.

How Can You Participate?

Past festivities included live music, seasonal displays, a Yule log, a large-scale model train, and warming bonfires. Because of its popularity the tree lighting ceremony is for ticketed visitors only. Several thousand free tickets are distributed on a selected date; however, the “Pathway of Peace” and other festival events are free and open to the public.

For information on the tree lighting and pageant events, contact the White House Visitor Center in the fall, at 202-208-1631, or check the National Park Service website at nps.gov/whho. 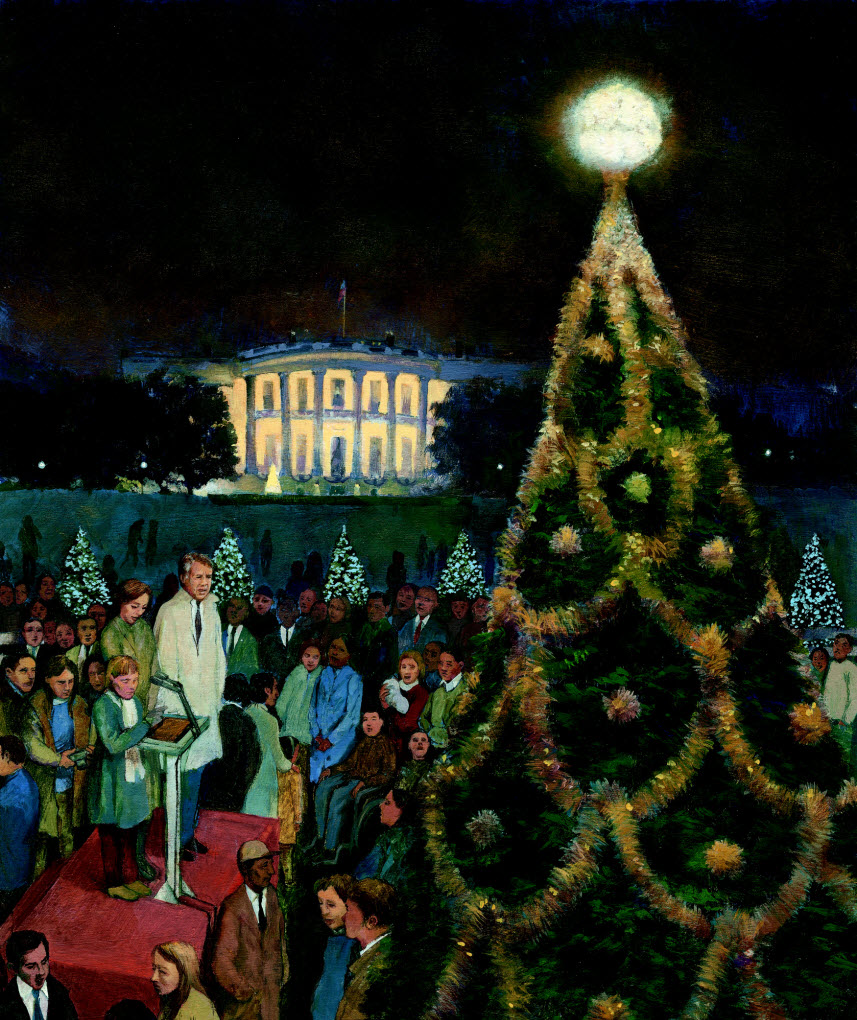