George Washington, the father of our country, had no children of his own but he was involved in breeding of another nature—that of mules and hounds.

Washington bred hunting dogs. His papers at the Library of Congress note that he wanted to breed “a superior dog, one that had speed, sense and brains.” In the mid-1780’s, aware of Washington’s intense interest, Marquis de Lafayette Washington’s French friend and ally during the Revolutionary War, sent him seven massive hounds. Young John Quincy Adams, son of John Adams who was then minister to England, escorted the hounds overseas from France to America. Future president John Quincy invoked the ire of General Washington by abandoning the hounds once the ship docked in the New York harbor. Washington worried over his missing hounds, and although they were eventually found and shipped overland to Mount Vernon, Washington’s home in Virginia, it is not known if he ever truly forgave young Mr. Adams.

The French hounds were reportedly so fierce Washington assigned a servant to monitor their meals because they tore each other apart fighting over their food. He crossed these French beasts with his own black and tan hounds to create a new breed—the American Foxhound.

In addition to Sweet Lips, Tipsy, Tipler, Cloe, Searcher, and Drunkard—the hounds are portrayed in Steven Kellogg’s delightful illustration in Our White House: Looking In, Looking Out, pictured below—Washington had more than twenty additional canine companions. They included:  Mopsey, Pilot, Tartar, Jupiter, Trueman, Truelove, Juno, Duchess, Ragman, Countess, Lady, Rover, Vulcan, Singer, Must, Tiyal, Forrester, Captain, and the frisky Madam Moose, of whom Washington noted in his diary, “A new coach dog [arrived] for the benefit of Madame Moose; her amorous fits should therefore be attended to.”

One of Washington’s hounds, Vulcan, black and so big a young boy could ride him like a pony, had powerful jaws and an insatiable appetite. It seems he had a taste for Virginia hams. A story is told of Vulcan sneaking into the Washington’s Mount Vernon kitchen, snatching a succulent ham, and running “straight to the kennels with it locked in his great jaws.” Mistress Martha (Washington’s wife) was miffed, but the event delighted Master George.

It is commonly held belief that the Marquis de Lafayette also gifted George Washington with a French basset hound, bringing the basset for the first time to America, but no historical evidence is available to support that claim.

In 1785, when King Charles III of Spain heard that General Washington, at home in Mount Vernon, was looking for the finest jackasses in the world to mate with his mares to create “super mules,” he sent Washington two of his best Spanish donkeys. (There is no definitive evidence supporting whether the donkeys were Andalusians, Catalonians, or another breed.) Only one survived the cross-Atlantic journey, landing safely in Boston. With meticulous care, Washington personally planned its arrival at Mount Vernon, making sure that his mares had lived a celibate existence so that they would warmly welcome their “foreign affair.” The regal jackass—Washington named him Royal Gift—was not at all pleased with the proffered country bumpkins and made no attempt to seal the deal.  As frustrated as the poor mares, the creative Mr. Washington decided to trick Royal Gift.  He used a female donkey to capture the attention of the Spanish jackass, then, at just the right moment, pulled a switch substituting the femme fatale donkey with one of his Virginian mares. The ploy worked and by 1799 there were fifty-seven new mules at Mount Vernon. Washington farmed them out across the country to improve the nation’s stock and as a result many of the best mules today can trace their lineage back to old Royal Gift and George Washington’s mares.

Education notes for parents and teachers

Motivating kids to read more about American history can be challenging. A great way to increase young people’s interest is to make history personal, to build on things that make historic figures human and approachable. Stories of presidential pets and animals provide a great springboard for sparking  young people’s interest in more substantive stories about presidents and American history. Young people growing up in rural areas, and kids involved with 4-H Club breeding programs, might find this article about George Washington of special interest. For young people growing up in suburban and urban areas, this article on George Washington can provide a window into the past and present lives and lifestyles of many Americans, for whom animal breeding is a part of daily life. 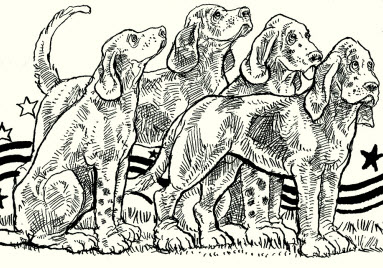