Mr. Christie currently works as a freelance illustrator and operates his wonderful autographed children’s bookstore named GAS-ART GIFTS in Decatur, Georgia. He lectures in schools and libraries, teaches in after-school programs, and is a skilled bookbinder. Mr. Christie is available for murals, portraits, and art workshops.

Mr. Christie is a two-time recipient of The New York Times’ 10 Best Illustrated Children’s Books of the Year Award and a three-time winner of the Coretta Scott King Honor Award in Illustration. He’s a recipient of the the NAACP’s Image Award, The Boston Globe’s Horn Book Award, American Library Association’s Theodore Seuss Geisel Award in Illustration, the 2013 Ashley Bryan Illustrated Africana Children’s Literature Award, and a 10 Books All Young Georgians Should Read Award in both 2014 and 2015. His illustrations have been featured on HBO Kids, PBS’ “Between the Lions”, New York City’s subway cars, the 2013 Congo Square New Orleans Jazz and Heritage Festival poster, and on the 2013 “Kwanzaa Forever” stamp.

Be sure to check out Christie’s picture book Mousetropolis (Holiday House, 2015), as well as The Palm of My Heart: Poetry by African American Children, edited by Davida Adedjouma, which won a Coretta Scott King Honor for illustration, and Only Passing Through: The Story of Sojourner Truth, which was selected as a New York Times Best Illustrated Book.

If you are on Facebook, find R. Gregory Christie at Facebook.com/GasArtGifts. 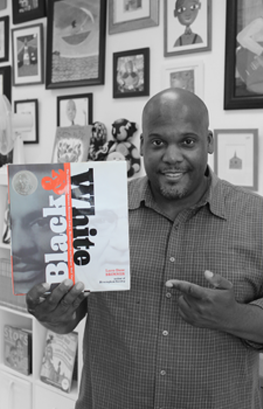