Nixon’s presidency began with a strong, successful first term. When he took office the nation continued to be divided over the Vietnam War. Nixon was committed to peace and world stability. He withdrew American troops from Vietnam and ended the draft. Nixon also traveled to China and the Soviet Union, the first U.S. president to do so. While in Moscow Nixon met with Russian leader Leonid Brezhnev and succeeded in negotiating the strategic arms limitations treaty (SALT) to limit nuclear weapons. Nixon was reelected to a second term by a wide margin. However, his presidency ultimately ended in scandal and disgrace. In June of 1972 five burglars were caught planting wiretapping devices in the headquarters of the Democratic National Committee at the Watergate Building in Washington, D.C. From the very beginning of the investigations, Nixon vehemently denied any previous knowledge of or association with the Watergate incident. An intensive investigation ultimately revealed that Nixon and most of his appointees had been illegally recording conversations at the White House, the Executive Office Building, and Camp David. These recordings proved that Nixon not only knew about the Watergate burglary, but also participated in its cover-up. Three articles of impeachment were brought against Nixon by the House Judiciary Committee: obstruction of justice, abuse of power, and the unconstitutional defiance of its subpoenas. Nixon was advised to resign, and at first he refused. However, learning that he would not win an impeachment trial, Nixon resigned the presidency in a televised address on August 8, 1974. He was the first and only president to have resigned.

Nixon’s successor, President Gerald Ford, issued to him a “full, free, and absolute pardon [for all federal crimes that he] committed or may have committed or taken part in” as president. Nixon accepted the pardon.

On accepting the Republican nomination for president, Nixon declared, “Let us begin by committing ourselves to the truth––to see it like it is, and tell it like it is––to find the truth, to speak the truth, and to live the truth.” (1968)

“Let historians not record that when America was the most powerful nation in the world we passed on the other side of the road and allowed the last hopes for peace and freedom of millions of people to be suffocated by the forces of totalitarianism. And so tonight––to you, the great silent majority of my fellow Americans––I ask for your support.” (Address to the Nation on the War in Vietnam; November 3, 1969)

During a televised question-and-answer session with the press, Nixon asserted, “I made mistakes but in all my years of public life I have never profited, never profited from public service. I’ve earned every cent. And in all of my years in public life I have never obstructed justice. . . . I welcome this kind of examination because people have got to know whether or not their President is a crook. Well, I’m not a crook. I’ve earned everything I’ve got.” (November 17, 1973)

Nixon’s favorite president was Woodrow Wilson, whom he admired for his efforts to establish world peace. Nixon hung a picture of Wilson in his own office. After his inauguration, Nixon had Wilson’s presidential desk moved into the Oval Office so he could also use it. Nixon apparently was in the habit of working at the desk with his feet resting on it. His heels marred the surface, and a White House aid sent the desk to be refinished while Nixon was traveling abroad. When Nixon returned, he was not happy to see the repairs: “I didn’t order that. I want to leave my mark on this place just like other Presidents!”

In addition to the Watergate Scandal, other controversies damaged Nixon’s administration. Vice President Spiro Agnew was involved in bribery and tax-evasion schemes. He subsequently resigned in October 1973. Nixon’s own personal finances were later scrutinized, and it was determined that he had also been involved in tax evasion and owed more than $400,000 in taxes.

The twenty-two galleries of the museum memorialize Richard Nixon’s political career. Interactive video and touchscreen technology present the highlights and timeline of important events of his presidency, including the Watergate scandal. On the grounds are the gravesites of Mr. and Mrs. Nixon, which are surrounded by a beautiful English country garden, and the restored 1912 farmhouse where Nixon was born. 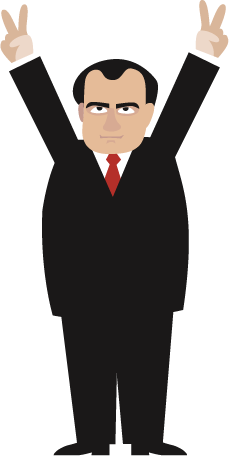