Robert Byrd has been delighting children of all ages with his whimsical, fantasy-filled children’s books for over 30 years. As author and illustrator he has the rare talent to see his fanciful visions through to the minutest detail. Whether enlightening audiences to the many talents of Leonardo DaVinci or taking us into a wonderous world filled with foxes and bears in military attire, Bob, (as he’s more affectionately known), is sure to spin us a tale we’ll not soon forget. Bob was the 2003 winner of the prestigious Golden Kite Award for excellence in children’s books for Leonardo — Beautiful Dreamer.

Robert Byrd was born in Atlantic City and studied at the Philadelphia Museum College of Art. He has illustrated sixteen books for children and has had his children’s book art exhibited at the Philadelphia Art Alliance; The World Children’s Book Fair in Bologna, The Society of Illustrators, New York; The Art institute of Philadelphia; The University of the Arts, Philadelphia; and Cricket, 25 Years of Stories and Art for Kids, the Art Institute of Chicago. He teaches Children’s Book Illustration at The University of the Arts, and Moore College of Art and Design in Philadelphia. He has two grown children, Rob and Jennifer, and lives in Haddonfield, New Jersey with his wife Ginger and two cats.

“When I’m working on a picture in a children’s book, I like to think of the space I am working in as a small stage. This stage is filled with characters like an opera. In each scene, the most important characters sing the lines that tell the story, and must be seen right away. The other characters on the stage help to tell the story, but they are really secondary and part of the background, like scenery.”

“The most important thing is to have the small world I create in a picture perfectly match the words of the story, so that even if it is a make-believe world in the eyes and minds of the readers, everything you see is real.” 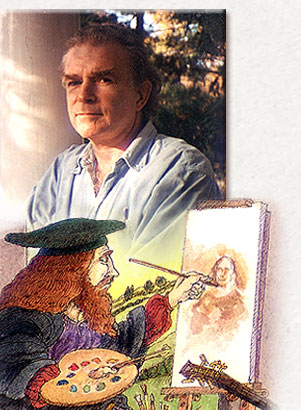