Hayes was narrowly elected to the presidency. He received almost 300,000 fewer popular votes than his opponent, but one more electoral vote. That final electoral vote was hotly contested, and Congress established an Electoral Commission to work out the dispute and decide the final count of 185 to 184 electoral votes. Many of Hayes’ opponents were furious, with some southern Democrats threatening to secede. Hayes was vilified by many as “His Fraudulency,” “Rutherfraud B. Hayes,” and “the Usurper.” Hayes extended a conciliatory hand to the South by pledging to remove federal troops. The subsequent removal of these troops ended Reconstruction, and Hayes further advocated the restoration of “wise, honest, and peaceful local self-government.” He also pledged to protect the rights of African-Americans.

To remedy the scandal and corruption that marked Grant’s presidency, Hayes sought to reestablish credibility and respect for government by appointing people based solely on merit rather than personal or political patronage. Upon his election, Hayes announced that he would serve only one term, and he kept his word. In the years following his presidency, he pursued social endeavors such as prison reform and education for poor African-American children in the South.

“Let me assure my countrymen of the Southern States that it is my earnest desire to regard and promote their truest interest––the interests of the white and of the colored people both and equally––and to put forth my best efforts in behalf of a civil policy which will forever wipe out in our political affairs the color line and the distinction between North and South, to the end that we may have not merely a united North or a united South, but a united country.”

1877: Thomas Edison invents the phonograph • 1879: Edison patents the light bulb • 1880: New York City is recognized as the first U.S. city upon reaching a population of one million • The Cologne Cathedral in Cologne, Germany (begun in 1248) is completed • Auguste Rodin sculpts The Thinker • Gilbert and Sullivan present The Pirates of Penzance • New York streets are first lit by electricity • Canned fruits and meats are sold in stores

The White House was much smaller at the time of Hayes’ presidency. During one particular diplomatic dinner the British minister’s wife told Mrs. Hayes that she needed to leave early and preferred to do so quietly out a side door. Mrs. Hayes asked her son to assist the minister’s wife. Years later the son recounted the story: “Of course, I had explored the White House from cellar to attic and knew every door and passageway. There was not a single side or back door available. The ground floor was then simply a basement, where coal, old furniture and other odds and ends were stored. I recalled a door near the coal-bin, and led her through the dark musty basement and let her out of this door. She was very jolly and laughed heartily over the escapade.”

Field Trips for Rutherford B. Hayes

The first presidential center is located on part of the Hayes family estate and was the retirement home of the President and his wife, Lucy. On the grounds are his Victorian home with original family furnishings, the Hayes Museum and Library, and the burial site of Hayes and his wife. 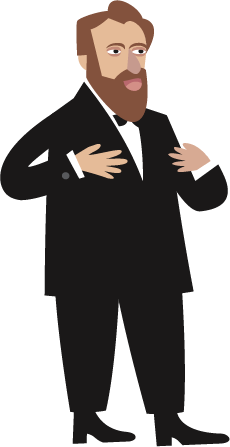 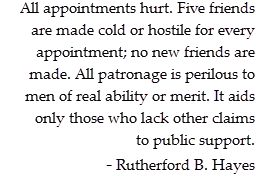