Susan Cooper, born and raised in England, has written books for children and young adults, a Broadway play, and several screenplays, two of which earned Emmy nominations. The five books in her fantasy sequence, The Dark Is Rising, won between them the Newbery Medal, two Carnegie Honor Awards, the Boston Globe-Horn Book Award and two Tir na n-Og Awards. She is a passionate advocate of the written word, particularly in a book of lectures, Dreams and Wishes. Susan Cooper has two grown children and lives in Massachusetts.

Learn more about Cooper and her work at TheLostLand.com.

If you are on Facebook, find Susan Cooper at Facebook.com/SusanCooperFanPage.

The Boggart and the Monster (McElderry)

Behind the Golden Curtain: A View of the USA (Scribner)

The Magic Maker: A Portrait of John Langstaff, Creator of The Christmas Revels  (Candlewick)

Dreams and Wishes: essays on writing for children (McElderry)

When I Was Your Age, contributor (Candlewick) 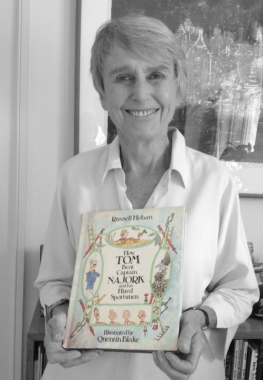 Author Susan Cooper recommends How Tom Beat Captain Najork and His Hired Sportsmen (David R Godine Publishers, Inc., 1974), written by Russell Hoban and illustrated by Quentin Blake,
as a Great Read for ages 5 and up. Check out more Great Reads
on thencbla.org.