The Oval Office: The World’s Most Famous Office

If the walls of the Oval Office could talk, what amazing stories they might tell! Much happens within the confines of the famous bowed walls of the president’s official workspace—presidents review potential policy and security briefings, consult with their advisors, meet with foreign diplomats, sign legislation, greet guests, and address the American public on television and radio. Although most Americans will never step foot in the Oval Office, modern photography, journalism, and television broadcasts have enabled us to vicariously witness the young Kennedy children playing on the Oval Office floor, Jimmy Carter hosting British Prime Minister Margaret Thatcher, Ronald Reagan negotiating nuclear disarmament with Soviet General Secretary Mikhail Gorbachev, and George W. Bush comforting a nation stunned by the terrorist attacks of September 11th. Richard Nixon’s hidden tape recorders revealed even more about what happens when a president succumbs to the darker side of politics. More recently President Barack Obama rankled the sensibilities of decorum dictators when the White House released a photo showing Obama sitting at his Oval Office desk and talking on the phone wearing only shirt sleeves—a form of casual dress that his predecessor had completely forbidden to be photographed. Real work happens in the Oval Office, and Obama’s photograph demonstrates that he uses the room for much more than ceremony.

As the primary residence of the American president and the first family, the White House has facilitated the ultimate work-at-home experience since it was first built. Although today we recognize the Oval Office as the president’s office space within the White House, the Oval Office was not built as a part of the original mansion. In fact, during the first one hundred years of the executive mansion’s history, there was no designated office space. Most presidents worked in the rooms of the White House residence, most often in the room now referred to as the Lincoln Bedroom. Not until 1902 did Theodore Roosevelt tire of the cramped conditions and demand the construction of the West Wing to provide office space for himself and the staff. Roosevelt’s West Wing office bore no resemblance to today’s Oval Office however. Roosevelt’s office was rectangular. That same room is now known formally as the “Roosevelt Room” and functions as a conference room, complete with a large table and multimedia equipment for presentations.

It was William Taft who first conceived of an oval-shaped office, and Taft’s Oval Office was a completely different room from the office President Obama works in today. Taft oversaw an extensive remodeling of the West Wing in 1909 that included the construction of his new office, a room that he had converted from what previously served as the presidential secretary’s office. With one end of the room already round, Taft insisted that the room be rebuilt to a full oval to mimic the White House’s existing Blue Room.

Oval rooms were commonly featured in many of the federal-style homes and buildings constructed in the early years of American democracy. In fact, George Washington enjoyed entertaining in the two oval rooms of his Philadelphia home, which allowed guests to circulate around him easily and equally. Regarding Taft’s desire for an oval-shaped office, the White House website notes that “the Oval Office may have symbolized [Taft’s] view of the modern-day president. Taft intended to be the center of his administration, and by creating the Oval Office in the center of the West Wing, he was more involved with the day-to-day operation of his presidency than were his recent predecessors.”

When Franklin Roosevelt became president twenty years after Taft left office, he detested the central location of the Oval Office because it lacked windows and privacy. So Roosevelt built a new Oval Office in the southeast corner of the West Wing—an area that had previously been reserved for hanging wet laundry. The new location not only provided more natural sunlight from windows facing east and south, but also offered the president convenient access to staff members and a more direct route to the residence.

If Roosevelt were able to visit today’s Oval Office, he might miss the turquoise, gray, and green color scheme of his original design, but he would likely be pleased to find the bones of today’s Oval Office pretty much the same. The room is thirty-five feet long and twenty-nine feet wide, large enough to accommodate both a working space and a sizable meeting area with sofas and chairs. The ceiling reaches eighteen feet and six inches at its highest point and is graced with a medallion of the presidential seal in the center and detailed dentil molding along its perimeter. The ornate ceiling and other architectural details, such as the wood-paneled walls, decorative pediments over the doors, and three bookcases built into niches, reflect neoclassical and Georgian influences. The president’s desk sits before the three large south-facing windows, and a fireplace serves as a focal point at the opposite end of the room. In front of the fireplace are two Martha Washington chairs, which provide the primary seating when the president meets with another foreign leader or other dignitary.

Popular images of the Oval Office fed to us through news media and TV shows such as “The West Wing,” “24,” and “Scandal” often portray the space as if it were disconnected from the rest of the White House, a room all to itself. Nothing could be further from the truth. In reality the Oval Office is located on the first floor of the West Wing and contains four doors that connect it to other areas. A series of atrium-style doors on the east side of the room leads outside to the Rose Garden, and the opposite door leads to a private smaller study and dining room for the president’s personal use. Two additional doors are sited on the north side of the Oval Office, both of which are designed to blend into the walls: the northwest door opens onto the main hallway of the West Wing, and the northeast door opens to the president’s secretary’s office. The Roosevelt Room, Theodore Roosevelt’s former office, is located across the hall from the Oval Office.

The Oval Office is traditionally redecorated to reflect each president’s personal tastes and attitudes. Jimmy Carter, who favored frugality, was one of the few recent presidents who chose to retain the Oval Office décor selected by his predecessor. To personalize this space most presidents choose furniture, artwork, and sculpture from the historic collection. John F. Kennedy’s Oval Office walls were adorned with seascapes and naval paintings. Clinton chose busts of his favorite presidents Franklin Roosevelt and Abraham Lincoln to sit on the table behind his desk and selected red, blue, and gold as the primary upholstery and carpet colors. George W. Bush replaced Clinton’s color choices with antique gold and hung paintings depicting his home state of Texas. Barack Obama chose to redecorate using neutral tones and more casual furnishings, complemented by a combination of both traditional art (such as Childe Hassam’s 1917 painting of “The Avenue in the Rain”) and more modern choices (such as paintings by Edward Hopper of a Cape Cod farm).

The items each president keeps on his desk in the Oval Office often offer a glimpse into the president’s past, personality, and beliefs. Truman quite famously kept a wooden sign on his desk declaring “The Buck Stops here!” Reagan and Clinton preferred the optimistic slogan “It can be done” on their desks. Beginning with Kennedy, most presidents have used the historic Resolute desk, which was crafted from the timbers of the retired British ship HMS Resolute and presented as a gift of peace from Queen Victoria in 1880. Only Lyndon Johnson, Nixon, and Gerald Ford chose not to use the Resolute desk.

Another key feature of the Oval Office that most presidents choose to change is the rug. Though each version of the Oval Office rug features the presidential seal at the center, presidents are free to redesign the colors and other elements embedded in the rug’s design. Bill Clinton’s rug was dominantly royal blue with a floral border and red accents. Laura Bush redesigned the rug when her husband became president, and it featured a yellow sunburst emanating from the seal to relay what Laura intended to be an “open and optimistic” element to the room. Bush’s rug also included a border comprised of olive branches and blue stars. Obama chose to include a series of five quotations along the border of his rug, one each from Franklin D. Roosevelt, Martin Luther King, Jr., Abraham Lincoln, John F. Kennedy, and Theodore Roosevelt.

The design of the rug’s presidential seal was changed by Harry Truman in the wake of World War II. The main element of the seal is a bald eagle, which represents the United States. The eagle holds an olive branch in one talon and a group of arrows in the other. Before Truman’s administration, the eagle faced the military might of the arrows. Looking toward a peaceful future, Truman redesigned the seal so that the eagle now glances toward the olive branches. The seal remains that way in the rug designed for Obama.

“Make yourself at home, Barack: The precise job of decorating the Obama Oval Office.” 10 March 2009.
www.dailymail.co.uk/news/worldnews/article-1120121/Make-home-Barack-The-precise-job-decorating-Obama-Oval-Office.html

“Symbolizing the Presidency: Life in the Oval Office.” 11 March 2009.
http://georgewbush-whitehouse.archives.gov/history/life/ovaloffice.html 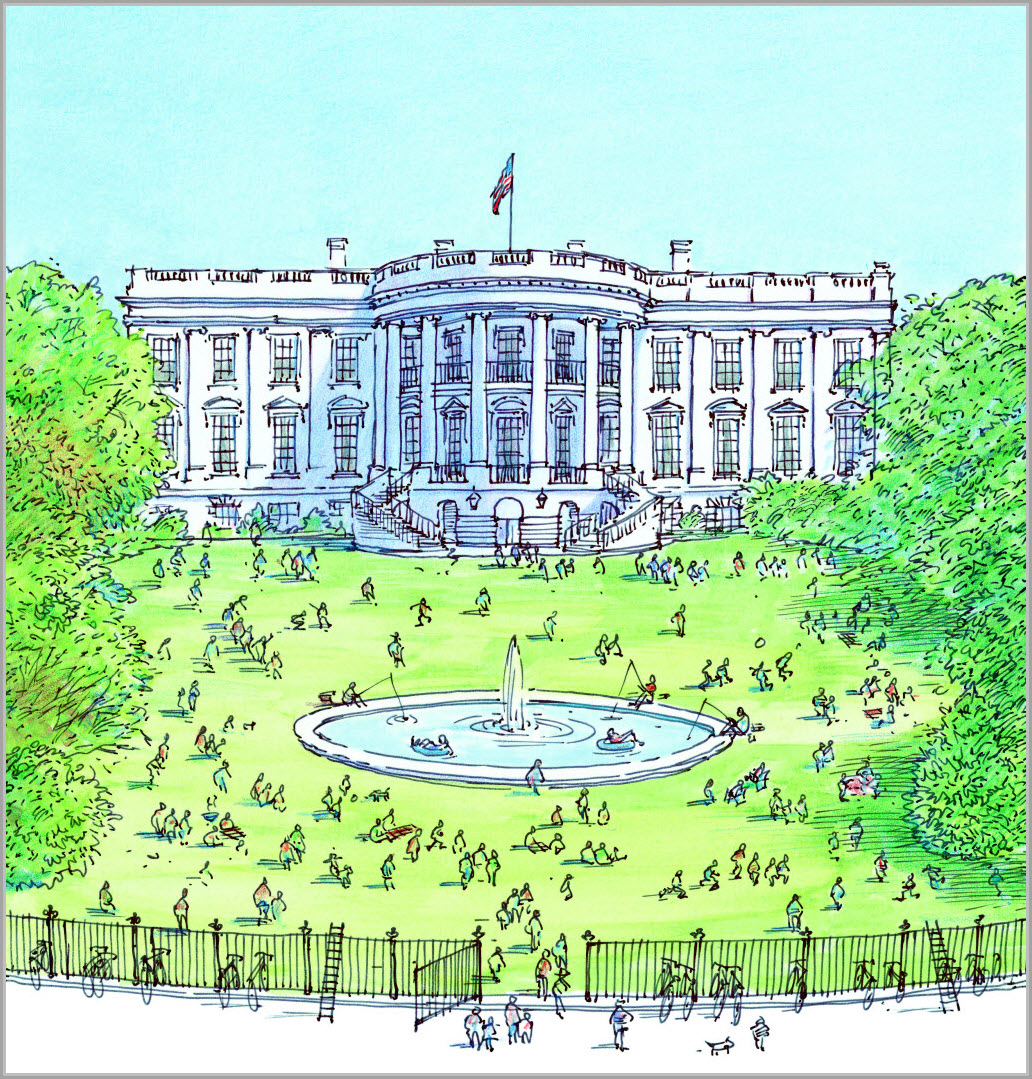