Roosevelt’s parents were Theodore and Martha Bulloch Roosevelt. Roosevelt married Alice Hathaway Lee in 1880, who died in 1884. They had one daughter, Alice Lee. In 1886 Roosevelt married Edith Kermit Carow, who served as first lady. They had five children together: Theodore, Kermit, Ethel Carow, Archibald Bulloch, and Quentin.

Roosevelt became the youngest president yet at age 42 when he rose to the office upon President McKinley’s assassination. He brought his endless energy and love of the outdoors to the national stage, and was the first president committed to conservation of natural resources. He in fact created the U.S. Forest Service and signed the 1906 Antiquities Act, which designated 18 national monuments. He also worked with Congress to establish five national parks and 51 wildlife refuges, as well as to protect more than 125 million acres of land as national forests.

Throughout his political career, even before becoming president, Roosevelt fought corruption and sought to help the poor, with his actions firmly rooted in the belief that all Americans should have a “square deal.” As president, he pursued policy and action that would help balance more fairly the needs of the working class with the interests of business. To that end, he prosecuted monopolies in the business world and also intervened in a coal miners’ strike to help win higher wages and shorter workdays for the miners. He also created the Department of Commerce and Labor to regulate industry and implement laws to control the railroads and food and drug industries.

Roosevelt recognized the need for a more direct shipping route between the Atlantic and the Pacific and therefore sought the construction of the Panama Canal. Though Colombia rejected the idea of constructing a canal across Panama, the president encouraged Panama to fight for its independence, which later allowed the U.S. to build and control the canal. Roosevelt left the presidency voluntarily after two terms, but then chose to challenge his successor William Taft for the Republican nomination in 1912. Roosevelt lost and so ran as an Independent. Republican votes were split between Taft and Roosevelt, so in 1912 Woodrow Wilson was elected as the 28th president.

Roosevelt’s vitality is legendary. Regarding his approach to life, he once stated, “Get action. Do things; be sane; don’t fritter away your time; create, act, take a place wherever you are and be somebody; get action.”

“The joy of living is his who has the heart to demand it. Life is a great adventure, and I want to say to you, accept it in such a spirit.”

In a letter to Sir Edward Gray, Roosevelt wrote, “We demand that big business give the people a square deal; in return we must insist that when anyone engaged in big business honestly endeavors to do right he shall himself be given a square deal.” (November 15, 1913)

“The first requisite of a good citizen in this Republic of ours is that he shall be able and willing to pull his weight.”

“To waste, to destroy our natural resources, to skin and exhaust the land instead of using it so as to increase its usefulness, will result in undermining in the days of our children the very prosperity which we ought by right to hand down to them amplified and developed.”

Roosevelt was the first president to call the president’s residence the “White House.” The White House had previously been called the “Executive Mansion” or the “President’s House.”

Roosevelt was the first American to win the Nobel Peace Prize. He was awarded the prize in 1906 for his role as peacemaker in the Russo-Japanese War.

In 1903 the toy maker Richard Steiff designed the first stuffed bear and named it “Teddy” following the publication of a cartoon that illustrated Roosevelt’s refusal to shoot a black bear cub during a Mississippi hunting trip. The “Teddy bear” subsequently became a popular toy around the country.

Roosevelt’s six young children brought an energetic and playful spirit to the White House. One time during a visit with Owen Wister, a friend of Roosevelt’s from college, the president’s daughter Alice kept running in and out of the room. Wister asked Roosevelt, “Theodore, isn’t there anything you could do to control Alice?” And the president responded, “Well, I can do one of two things. I can be President of the United States or I can control Alice. I cannot possibly do both.”

Another time during a meeting with the Attorney General, Roosevelt’s son Quentin entered the room and placed three snakes in his father’s lap. Roosevelt is reported to have calmly stated to his son, “Hadn’t you better go into the next room? Some congressmen are waiting there and the snakes might enliven their tedium.”

This home of President Teddy Roosevelt from 1886 until his death in 1916 served as the “Summer White House.” Adjacent to the house is the Old Orchard Museum and a visitor center. Furnished as it was during Roosevelt’s lifetime, the emphasis of the exhibits is on the post-presidential period and his many hobbies and interests. 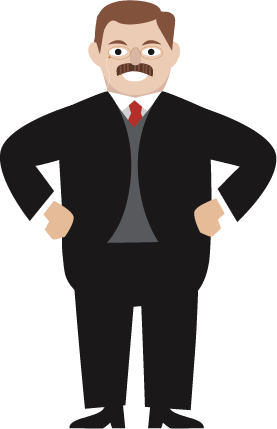