Tony Auth’s cartoons, covering the politics and culture of the city of Philadelphia, the state of Pennsylvania, and the country have influenced public opinion and politicians for more than 40 years. “Our job is not to amuse our readers,” Auth said when he accepted the 2005 Herblock Prize for excellence in editorial cartooning. “Our mission is to stir them, inform and inflame them.”

Tony was born on May 7, 1942 in Akron, Ohio.  He was bedridden for eighteen months at the age of five.  It was during this period that he began drawing, inspired by comic strips, children’s books and radio dramas.

Over the course of his career, Auth won many awards, including five Overseas Press Club Awards, the Sigma Delta Chi award for distinguished service in journalism, the Thomas Nast Prize, the Herblock Prize, and the Pulitzer Prize.

Thoughts from Tony Auth on creating an illustration for Our White House: Looking In, Looking Out: “I was drawing a political cartoon on a completely different subject while listening to the Senate hearings on the Watergate scandal. To my astonishment and delight, testimony revealed that President Richard Nixon had installed a secret taping system in the White House. I immediately went to work on another drawing, a version of the illustration you see in Our White House: Looking In, Looking Out.”

Tony Auth passed away in September 2014.

A Promise is a Promise, written by Florence Parry Heide (Candlewick Press) 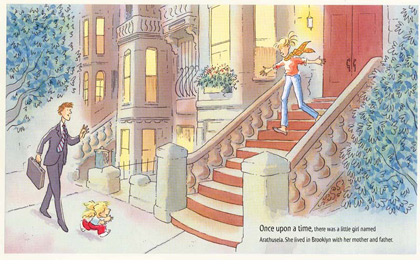 Instead of a photograph,
Tony Auth prefers to feature
one of his illustrations.