President Johnson’s term was plagued by bitter disagreements about Reconstruction, and so Grant, as the widely celebrated Union general who helped end the Civil War, was easily elected as the people welcomed his promise of “Let us have peace.” Grant’s presidency was consumed with a series of scandals. Though he was well regarded as an honest man of stalwart personal character, he was unable to judge adequately the character of others and thus unfortunately appointed friends and relatives to government jobs, many of whom exploited their positions through bribery and theft. Massachusetts Senator Charles Sumner was a critic of Grant who told the Senate the country was suffering from “a dropsical nepotism swollen to elephantiasis.” Grant also was known to accept extravagant gifts from supporters.

Ultimately, Grant is best remembered for his role as Union general, rather than as an effective president. He did, however, serve two terms. Later in life, perhaps recognizing that his military experience was not adequate preparation for politics, he wrote, “I did not want the Presidency, and I have never quite forgiven myself for resigning the command of the army to accept it. . . . War and politics are so different.”

Grant became a national war hero as the Union general who ended the Civil War, but he regretted his military service in the earlier Mexican War, having noted that it “was one of the most unjust wars ever waged by a stronger against a weaker nation. . . . I have never altogether forgiven myself for going into that [war]. I do not think there was ever a more wicked war than that waged by the United States on Mexico. I thought so at the time, when I was a youngster, only I had not moral courage enough to resign.”

In the midst of the Civil War, Grant declared to Confederate General Simon B. Buckner at Fort Donelson, Tennessee, “No terms except an unconditional and immediate surrender can be accepted.” (February 1862)

Regarding the passage of the 13th Amendment, Grant asserted, “A measure which makes at once 4,000,000 people voters who were heretofore declared by the highest tribunal in the land not citizens of the United States, not eligible to become so . . . is indeed a measure of grander importance than any other act of the kind from the foundation of our free Government to the present day.”

In his annual message to Congress, Grant wrote, “Mistakes have been made . . and I admit [them. But] failures have been errors of judgment, not of intent.” (1876)

1869: The first transcontinental railroad service is established • 1870: The Dictionary of American Biography is first published • 1871: The Treaty of Washington settles existing difficulties between Britain and the U.S. Chicago experiences The Great Fire • The U.S. population totals 39 million • 1872: James Whistler paints The Artist’s Mother • The first international soccer game is held (England versus Scotland) • 1873: Color photographs are developed • 1874: The first exhibition of Impressionist paintings is held in Paris. Tennis is introduced to America by Mary E. Outerbridge • 1875: Mark Twain writes The Adventures of Tom Sawyer • Mary Baker Eddy writes Science and Health, which becomes the fundamental doctrinal textbook for the Church of Christ, Scientist in 1879 • 1876: Alexander Graham Bell invents the telephone

When the Confederate Army Commander Robert E. Lee surrendered to Union General Grant at the Appomattox Courthouse to end the Civil War, Grant recognized the valor of the Confederate troops and treated them with respect, allowing them to return home with their swords, side arms, and horses. He also offered lenient terms of surrender that prevented the Confederates from being tried for treason. Indeed, Grant later commented on Lee’s surrender, “I felt like anything rather than rejoicing at the downfall of a foe who had fought so long and so valiantly.”

Grant’s middle initial of ‘S’ does not represent a name. In response to a letter from someone who wondered about his middle name, he noted, “It was a mistake made . . . when application was first made . . . to West Point. . . . After I received my Diploma and Commission, with the ‘S’ inserted, [I] adopted it and have so signed my name ever since.”

Following his second term as president, Grant and his family traveled around the world. When they returned, Grant made an unfortunate investment in a banking firm that left him in significant debt. To reestablish financial security for his family, he worked diligently on his memoirs, which had been commissioned by Mark Twain. Despite being severely ill with terminal throat cancer, he was able to complete the last words just three days before he died. His memoirs were wildly successful, earning $450,000.

This home was presented to the Grant family after the general’s impressive Civil War service and remained in the family until 1880. It has been faithfully restored with many original Grant family furnishings.

The Ulysses S. Grant Presidential Library is located in the Congressional and Political Research Center in the Mississippi State University’s Mitchell Memorial Library. The Grant Presidential Collection consists of some 15,000 linear feet of correspondence, research notes, artifacts, photographs, scrapbooks, and memorabilia and includes information on Grant’s childhood from his birth in 1822, his later military career, Civil War triumphs, tenure as commanding general after the war, presidency, and his post-White House years until his death in 1885. There are also 4,000 published monographs on various aspects of Grant’s life and times. Undergraduate and graduate students and on-campus and visiting scholars may use the collection. Others may request permission from the Presidential Library staff.

Four of the five buildings at the historic site—the main house, stone building, chicken house, and ice house—have been restored to their 1875 appearance while the barn used as the museum is of 1868 vintage. The Grants considered the main house—White Haven—their home.

While dying from throat cancer, President Grant lived in this cottage outside of Saratoga Springs during the summer of 1885. During this time, he struggled to complete his memoirs so that he could provide for his family after his death.

Overlooking the Hudson River from the Morningside Heights section of Manhattan, General Grant National Memorial is the largest tomb in North America. Grant’s Tomb (as it is commonly called) is not only the final resting place of the General, but a memorial to his life and accomplishments.

A three-room cottage built in 1817, the birthplace of President Grant was restored and furnished with period pieces, some of which belonged to the Grant family. The structure had an interesting history traveling barges and trains on an extensive tour of the country.

Built in 1823, this was the boyhood home of President Grant. The home is near the tannery Grant’s father built and two schoolhouses that Grant attended as a boy. 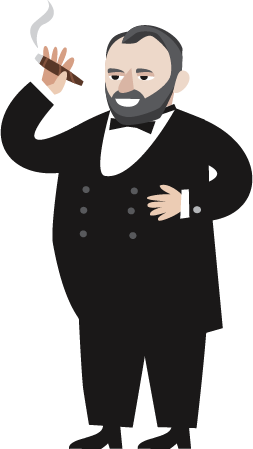