Wendell Minor is nationally known for the artwork he has created for over fifty award-winning children’s books. His many collaborators include Jean Craighead George, Robert Burleigh, Buzz Aldrin, Tony Johnston, Mary Higgins Clark, and last but not least, his wife Florence. In 2009 Wendell and Florence’s If You Were a Penguin, was chosen by Pennsylvania for their “One Book, Every Young Child” 2009 early literacy program, and they enjoyed the month they spent speaking to children in Pennsylvania’s libraries, schools, Head Start facilities, and Museums.

Wendell is also the cover artist and designer of over two thousand books for authors Pat Conroy, David McCullough, Fannie Flagg, and Nathaniel Philbrick among many others.  His portrait of “Truman” for the cover of David McCullough’s book is in the permanent collection of the National Portrait Gallery in Washington, D.C.

Wendell’s paintings has been exhibited widely throughout the country in various venues.  An exhibition of 25 years of his children’s book art, “Wendell Minor’s America” was on display at the Norman Rockwell Museum from November 2013 through May 2014.  The exhibit, which is traveling, will open at Aurora University’s Schingoethe Museum on October 2nd, 2015. A book featuring the art was published in conjunction with the exhibit, and is available through the Norman Rockwell Museum.

In 1988 Wendell was chosen as one of a six member team commissioned by NASA to document the shuttle Discovery’s return to flight.  He has created paintings for Chicago’s Adler Planetarium and Astronomy Museum and the U.S. Postal Service.

As President of the Society of Illustrators from 1989-1991, Wendell considers one of his most important contributions the organization of an international exhibition, and the subsequent publication of the book of the same name, entitled Art for Survival: The Illustrator and the Environment. He is Trustee Emeritus of the Norman Rockwell Museum in Stockbridge,  Massachusetts, is a member of the Low Illustration Committee at the New Britain Museum of American Art, and served on the Advisory Council for the Connecticut Center for the Book. Wendell received an Honorary Doctorate of Humane Letters from Aurora University in Illinois in 2004, and one from the University of Connecticut in 2010.

Wendell lectures at schools and universities across the country, frequently on environmental themes, and his books which have been featured on the PBS-TV program “The Reading Rainbow” are used in classrooms throughout the country.

In addition to illustrating and writing his own picture books for children Wendell continues to create paintings for book covers. 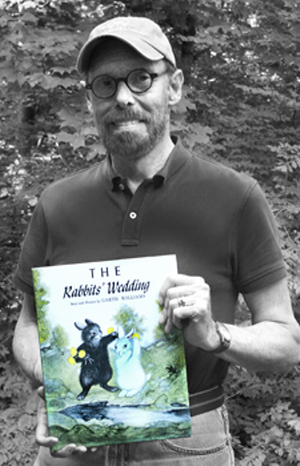 Illustrator and author
Wendell Minor recommends
The Rabbits’ Wedding (HarperCollins, 1958) by Garth Williams as a
Great Read for ages 4-8.
Check out more Great Reads
on thencbla.org.