Harrison was the first president to die in office. He caught a cold while giving his nearly two-hour inaugural speech outside on a cold, blustery day. He died 31 days later after the cold had developed into pneumonia. His death set other precedents as well, such as the orderly transfer of power to his vice president, John Tyler, and the proper handling of presidential funerals. Harrison’s funeral, with its highly orchestrated and dignified ceremony and procession, became the model that has essentially been followed for subsequent presidents.

The initial precedent established by Harrison that is likely to remain a hallmark of his legacy is the strategy he and his advisors established for running a presidential campaign. They successfully transformed a disparaging remark from a critic (“ . . . with a supply of cider and a pension, [Harrison] would happily sit by his log cabin for the rest of his days.”) into an effective campaign slogan: “Log Cabin and Hard Cider.” The down-to-earth slogan was well received by the public because it presented Harrison as a humble country boy whose “created” image contrasted well with that of his opponent, the incumbent Van Buren. Ironically, Harrison did not come from a humble background. Rather, he was heir to one of the most distinguished families in America. Harrison also introduced additional innovations associated with modern day campaigns, such as posters, handouts, and a crafty campaign “vehicle.” Harrison in fact sometimes ran his campaign from a log cabin installed on top of an open wagon as he traveled throughout the country to meet voters.

On heroism, Harrison noted, “The successful warrior is no longer entitled to . . . fame. . . . To be esteemed eminently great it is necessary to be eminently good. The qualities of the general and the hero must be devoted to the advantage of mankind.”

With his health steadily declining, Harrison wrote, “The job seekers pack the White House every day. They pursue me so closely that I can not even attend to the necessary functions of nature.”

1841: The U.S.S. Creole, carrying slaves from Virginia to Louisiana, is seized by the slaves, who sail to Nassau and become free • Adolphe Sax invents the saxophone • The first university degrees are granted to women in America.

William Henry Harrison is the only president whose grandson became president. Benjamin Harrison became the 23rd president in 1889.

MillerCenter.org/president/harrison
In-depth essays created by the University of Virginia on Harrison’s life and administration.

The birthplace of  William Henry Harrison, and his father, Benjamin, a signer of the Declaration of Independence, this house is also the site of the country’s first Thanksgiving.

This Federal style mansion was the home of William Henry Harrison for eight years in the early 19th century. Authentically furnished with many of Harrison’s own pieces, the house features distinctive curved walls, and a gallery of artifacts and exhibits about our ninth president.

Harrison was laid to rest in this simple family tomb on July 7, 1841 on the summit of Mt. Nebo in North Bend, Ohio. The tomb has 24 vaults containing the bodies of William Henry Harrison; his wife, Betty, who died in 1864; their son, John Scott, father of President Benjamin Harrison; and other members of the family. Several sealed vaults are unmarked. The site provides a wide view of the Ohio River and of the corners of three states—Ohio, Indiana, and Kentucky. 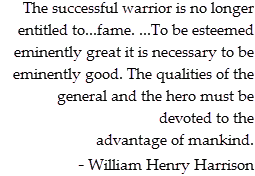