President Roosevelt chose Taft as the Republican presidential candidate to succeed him, and Taft won the election easily. As president, Taft followed Roosevelt’s policies and continued to support workers and the poor, as well as oppose large and powerful businesses. In fact, Taft originated more antitrust suits than Roosevelt had. Taft is also credited with creating the Department of Labor and extending the Civil Service.

By the end of Taft’s term, Roosevelt had lost confidence in him and chose to run once again against Taft for the Republican Party’s nomination during the next election. However, Taft won the nomination, so Roosevelt ran for president as an Independent. Neither won the election––the Democrat Woodrow Wilson won overwhelmingly. Taft retired happily from the presidency and taught law at Yale University. Then in 1921 he was appointed as Chief Justice of the U.S. Supreme Court. Becoming Chief Justice had in fact been Taft’s lifelong ambition, and he recognized it as his most significant achievement, once having noted, “I don’t remember that I ever was President.”

“Machine politics and the spoils system are as much an enemy of a proper and efficient government system of civil service as the boll weevil is of the cotton crop.”

“Anti-semitism is a noxious weed that should be cut out. It has no place in America.”

“I would rather be chief justice of the United States, and enjoy a quieter life than that which comes with the White House.” (1910)

In addition to these “firsts,” Taft was also the largest president at 6 feet 2 inches and approximately 325 pounds. He apparently was very good natured about his size. Before becoming president, he once visited a small town on legal business. After his meeting, he learned that the next train would not arrive for several hours, although a fast train would run through in an hour. He therefore wired the railroad superintendent to ask if the fast train would stop for a “large party.” The superintendent agreed. When Taft boarded the train, he remarked to the bewildered conductor, “You can go ahead; I am the large party.”

Restored to its original condition, the Taft house is the birthplace and boyhood home of the only person to serve as President and Chief Justice of the U.S. Adjacent to the house, is the Taft Education Center. 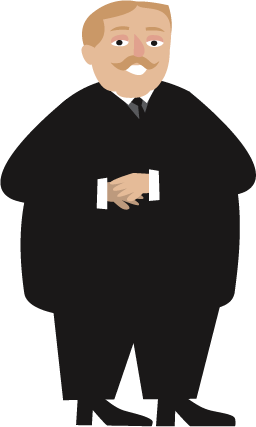