Clinton’s parents were William Blythe and Virginia Dwire Clinton. Clinton married Hillary Rodham in 1975. They have one daughter, Chelsea.

Clinton won the presidency in a three-way race against the incumbent President Bush and the Independent candidate, Texas businessman Ross Perot, by campaigning on a message of change.

Foreign affairs dominated Clinton’s presidency just as they had for President Bush. Clinton successfully negotiated the North American Free Trade Agreement with Canada and Mexico, which eliminated trade barriers and created the world’s largest free trade zone. In 1994 Clinton helped to obtain peace in Haiti by sending 20,000 troops to reinstate its ousted president, Jean-Bertrand Aristide. Aristide had become Haiti’s first freely elected leader in 1990, but was ousted only eight months later. The following year Clinton sent U.S. troops to lead a NATO attack against Serbian forces that were engaged in ethnic cleansing and also bombed Iraq when Saddam Hussein prevented UN weapons inspections. Clinton also met multiple times with the leaders of Israel, Jordan, and the Palestinians in an effort to bring a lasting peace to the Middle East, but no formal agreements were realized.

In domestic affairs, Clinton pushed early in his presidency for new economic and social policies, such as health care reform and the acceptance of gays in the military. Though he was not able to overhaul the health care system and implement universal care as he had hoped, he did obtain passage of the Family Medical Leave Act that requires companies to provide workers with up to three months of unpaid leave for family and medical emergencies. The acceptance of gays in the military required a compromise that became known as “Don’t Ask, Don’t Tell,” assuring that gay people could serve as long as they did not reveal their sexuality. Later in his tenure Clinton worked closely with both Democrats and Republicans to fashion a complete overhaul of the country’s welfare system. Clinton also emphasized a conservative fiscal policy and managed to pass the first balanced budget in almost 30 years. Indeed, Clinton presided over the longest economic boom in American history. The economy prospered with high levels of employment and home ownership. The prosperous economy helped to ensure Clinton was elected to a second term.”

A number of personal scandals rocked Clinton’s tenure in office, but it was accusations of misconduct with a 21-year old White House intern named Monica Lewinsky that nearly ruined his presidency. At first Clinton denied the allegations, but in the end he admitted to the grand jury that he had had an “inappropriate relationship” with Lewinsky. The House of Representatives impeached Clinton on charges of perjury and obstruction of justice, but he was acquitted by the Senate. Remarkably, Clinton maintained his highest approval ratings ever throughout the impeachment process.

“There is nothing wrong with America that cannot be cured by what is right with America.” (Inaugural Address; January 20, 1993)

During his European visit to honor the World War II dead on the anniversary of D-Day in France, Clinton stated, “We are the sons and daughters of the world they saved. [Now is our moment] to make common cause with other countries to ensure a world of peace and prosperity for yet another generation.” (June 6, 1994)

“For too long we’ve been told about ‘us’ and ‘them.’ Each and every election we see a new slate of arguments and ads telling us that ‘they’ are the problem, not ‘us.’ But there can be no ‘them’ in America. There’s only ‘us.’ ”

Clinton was the first Democratic president to win reelection since Franklin D. Roosevelt.

Clinton was always an excellent student and became the first president to be a Rhodes Scholar. He chose to study international politics while at Oxford University, then he returned to the U.S. to study law at Yale. Clinton’s passion lay not solely with his studies, however. He also excelled as a saxophone player and during his younger years had considered becoming a professional musician.

When Clinton was in high school, he was a delegate in the American Legion’s Boys Nation program, which provided the opportunity for him to meet President Kennedy at a White House reception. Shaking the president’s hand was life changing for Clinton and from that moment he decided to dedicate his life to politics.

Built in 1917 this wood-frame house was William J. Clinton’s first home. After the death of his father three months before his birth in 1946, Clinton lived with his maternal grandparents until his mother’s remarriage in 1950.

Housing the most comprehensive digital archive of presidential materials to date, the Clinton Presidential Center site includes the Presidential Library and Museum and the renovated Choctaw Station, built in 1899, home of the Clinton School of Public Service. 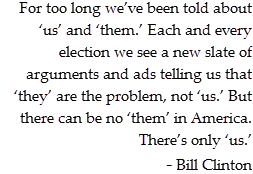