McKinley’s parents were William and Nancy Allison McKinley. McKinley married Ida Saxton in 1871. They had two daughters: Katherine and Ida.

McKinley’s administration ushered in a new world view––that of the U.S. as a dominant global power. As Americans became aware of the plight of Cuban revolutionaries fighting against the Spanish to gain their freedom, the public pressured a reluctant McKinley and Congress to act. The U.S. thus declared war to liberate Cuba. In the 100-day Spanish-American war, the U.S. destroyed the Spanish fleet, seized Manila in the Philippines, and occupied Puerto Rico, thereby ending Spain’s empire in the Americas and the Pacific. McKinley succumbed to the increasingly American imperialist sentiment and annexed the Philippines, Guam, Puerto Rico, and Hawaii. The U.S. also divided Samoa with Germany.

McKinley also enacted the highest tariff in history via the Dingley Tariff, which raised taxes on imports.

McKinley was elected to a second term, but was assassinated within a year, which made him the third president to be assassinated. He was shot twice by the anarchist Leon Czolgosz while greeting people during the Pan-American Exposition in Buffalo, New York, and died of his wounds about a week later.

McKinley had grown up with the dream of becoming president one day. Some time after realizing that goal he commented, “I have never been in doubt since I was old enough to think intelligently that I would someday be made President.”

“That’s all a man can hope for during his lifetime––to set an example––and when he is dead, to be an inspiration to history.”

In his Inaugural Address, McKinley noted about his reluctance to wage war, “We want no wars of conquest. We must avoid the temptation of territorial aggression. Wars should never be entered upon until every agency of peace has failed; peace is preferable to war in almost every contingency.” (March 4, 1897)

“Illiteracy must be banished from the land if we shall attain that high destiny as the foremost of the enlightened nations of the world which, under Providence, we ought to achieve.”

McKinley employed a unique handshake that became known as the “McKinley grip” to help him easily greet the multitudes of people at public receptions without overstraining his right hand. He would smile at each greeter, then take his or her right hand and squeeze it warmly before his own hand was caught in a hard grip, hold the guest’s elbow with his left hand, and then quickly move the guest along so he could greet the next person in line.

In addition to his specialized handshake, McKinley was also well noted for an astounding memory for faces and names. During a ceremony to dedicate a monument at the Antietam battlefield, McKinley called to an astonished older veteran he remembered from a previous event, “Hello, comrade, I saw you in the crowd at Gettysburg last month when I spoke there, didn’t I?”

The birthplace memorial monument is constructed of Georgian marble with two lateral wings—one wing houses the public library called the McKinley Memorial Library, and the other wing houses the McKinley Museum and an auditorium. The museum contains artifacts of the life and presidency of William McKinley.

Using objects and images from the museum’s vast collection, this gallery contains the largest collection of McKinley artifacts in the world and chronicles the life and career of our 25th president from his birth to his tragic death at the hands of an assassin. 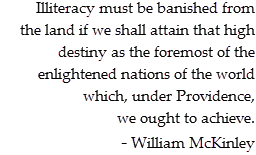