Wilson’s parents were Joseph Ruggles and Janet Woodrow Wilson. Wilson married Ellen Louise Axon in 1885, who later died at age 54 while Wilson was president. They had three daughters: Margaret Woodrow, Jessie Woodrow, and Eleanor Randolph. In 1915 Wilson married the widowed Edith Bolling Galt, who then served as first lady for the remainder of Wilson’s term.

As the Democratic nominee for president, Wilson promised a “New Freedom” that would improve welfare for the poor, as well as working conditions for laborers. As president, he supported progressive legislation to carry out his promises. Three major pieces of legislation that passed include the Underwood Act, which reduced tariffs and also implemented a graduated federal income tax; the Federal Reserve Act, which regulated banking; and the Clayton Antitrust Act, which prohibited unfair business practices. Additional legislation was passed later in his first term that prohibited child labor and limited the work day of railroad workers to eight hours. The public favored such legislation, as well as Wilson’s stalwart determination to keep the U.S. neutral in World War I, which began in 1914. Wilson therefore was elected to serve a second term.

Shortly after beginning his second term, Germany ignored U.S. neutrality and began sinking American ships. Wilson also discovered that Germany was attempting to create an anti-American alliance with Mexico. Wilson therefore asked Congress to declare war on Germany, proclaiming, “The world must be made safe for democracy.” Over one million American troops went to Europe to fight with the Allies in 1917, and their efforts helped ensure the fall of Germany in November 1918.”

Wilson worked diligently for peace throughout the war. He helped negotiate the Treaty of Versailles and also suggested a League of Nations be created to help peacefully resolve conflicts between countries. However, the Senate rejected the treaty and also refused to allow the U.S. to join the League of Nations. Despite these setbacks, his peacekeeping efforts were recognized and awarded with the Nobel Peace Prize in 1920. To sway the public to accept the treaty, Wilson embarked on a national tour. The travel exhausted him and he suffered a stroke that almost killed him. Wilson’s idea for an impartial organization of nations was later resurrected, however, as the United Nations following World War II.

“No one but the President seems to be expected . . . to look out for the general interests of the country.”

In his address to Congress asking for a declaration of war, Wilson declared, “The world must be made safe for democracy. Its peace must be planted upon the tested foundations of political liberty. We have no selfish ends to serve. We desire no conquest, no dominion. We seek no indemnities for ourselves, no material compensation for the sacrifices we shall freely make.” (1917)

“We are constantly thinking of the great war . . . which saved the Union . . . but it was a war that did a great deal more than that. It created in this country what had never existed before––a national consciousness. It was not the salvation of the Union, it was the rebirth of the Union.”

1913: The 16th and 17th Amendments are ratified, introducing the federal income tax and enabling the people of each state to elect their senators directly • Robert Frost publishes the poetry collection A Boy’s Will • Postimpressionism and Cubism are displayed in New York • Russian composer Igor Stravinsky’s The Rite of Spring is first performed in Paris • H. N. Russell formulates a theory of stellar evolution • Henry Ford pioneers the assembly line to produce cars • 1914: World War I begins • Bertrand Russell publishes Our Knowledge of the External World • Robert H. Goddard begins experimenting with rockets • Almost 10.5 million immigrants from southern and eastern Europe had entered the U.S. between 1905 and 1914 • The Panama Canal is completed • 1915: Albert Einstein postulates his General Theory of Relativity • Wireless service is established between the U.S. and Japan • Ford produces its one millionth car • 1916: The U.S. purchases the Virgin Islands for $25 million • Carl Sandburg writes Chicago Poems • Jazz becomes hugely popular across the U.S • Prohibition expands to 24 U.S. states • 1917: The U.S. passes literacy requirements for citizenship • Actor and Musician Charlie Chaplin earns a yearly salary of $1 million • 1918: World War I ends on November 11 when the Allies and Germany sign the Armistice • Approximately 8.5 million people have been killed, and 21 million people wounded • Influenza epidemic spreads worldwide, killing 22 million by 1920 • The U.S. population is now 103.5 million • 1919: Prohibition is enacted throughout the U.S. by the 18th Amendment • The first League of Nations meeting is held in Paris • Race riots occur in Chicago, and dock workers in New York strike • Carl Sandburg writes Corn Huskers. Jazz arrives in Europe • Ernest Rutherford demonstrates that the atom is not the final building block of the universe • 1920: The 19th Amendment gives women the right to vote • The U.S. produces 645 million tons of coal and 443 million barrels of petroleum • Almost 9 million motor vehicles are licensed in the U.S • Total U.S. population is almost 118 million

During his presidency, Wilson noted to a reporter that he would like to display a sign in his White House office that he had seen in a country church to defend the organist: “Don’t shoot; he is doing his damnedest.”

A flock of sheep was raised on the White House lawn while Wilson was president not only to help maintain the lawn, but to also provide wool that could be sold to raise money for the Red Cross during World War I. Wilson was known to walk outside and pat the heads of the sheep.

One of two boyhood homes of President Wilson open to the public, this former Presbyterian manse shares the site with the boyhood home of U.S. Supreme Court Justice Joseph R. Lamar.

This house was built by the Wilson family but was their home for only a short time. The focal point of the historic exhibits is the bed in which President Wilson was born in 1856.

President Wilson was born in 1856 in this house that was formerly a Presbyterian manse,. The museum features exhibits on Wilson’s life and career and there is a research library on site.

The only presidential museum in Washington D.C., this is the retirement home and final home of President Wilson. Remodeled by the president and his wife, the interior has been carefully preserved with authentic furnishings—an excellent example of American life in the 1920s. 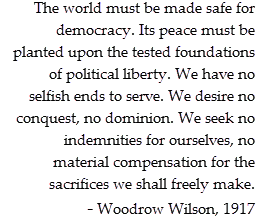