Taylor’s brief presidency was consumed with the ongoing discord over slavery and its potential expansion into the new territories acquired from Mexico. The crisis was escalating as many sought to extend slavery into what is now California, New Mexico, and Utah. Taylor himself was a slave owner who believed existing slave-owning states should be able to maintain their slaves, but he did not support the expansion of slavery into the west. Henry Clay and Daniel Webster sponsored the Compromise of 1850 (a series of five laws that attempted to resolve the territorial and slavery controversies by balancing the interests of the southern slave states with the northern free states), but Taylor opposed it. Taylor also opposed secession as a way to solve the nation’s differences and was firm in his stance that he would prevent any states from seceding by implementing a blockade of their harbors, imposing taxes on all goods transported in, and blocking any export of their goods out.

In 1850 Taylor became extremely sick after attending a July 4 celebration at the Washington Monument and died five days later, only sixteen months after his election. The country remained deeply divided upon his death. With the ascension of Taylor’s vice president, Millard Fillmore, to the presidency, the Compromise passed.

Regarding foreign relations, Taylor stated in his Inaugural Address, “In all disputes between conflicting governments it is our interest not less than our duty to remain strictly neutral, while our geographical position, the genius of our institutions and our people, the advancing spirit of civilization, and, above all, the dictates of religion direct us to the cultivation of peaceful and friendly relations with all other powers.” (March 5, 1849)

Regarding the possibility of southern states seceding because of the slavery dispute, Taylor proclaimed to Congressman Horace Mann, “I can save the Union without shedding a drop of blood. It is not true, as reported in the North, that I said I would march an army and subdue them; there would be no need of any.”

Despite his military career, Taylor viewed war dismally, having stated, “My life has been devoted to arms, yet I look upon war at all times, and under all circumstances, as a national calamity to be avoided if compatible with national honor.”

Soon after his election, Taylor was drawn into conversation with a fellow passenger aboard a ship. Taylor realized the stranger did not recognize him when he began discussing politics and indicated he had not voted for him. When the stranger asked him if he was a Taylor man, the newly elected president replied, “Not much of one––that is, I did not vote for him––partly because of family reasons and partly because his wife was opposed to sending ‘Old Zack’ to Washington, where she would be obliged to go with him.”

MillerCenter.org/president/taylor
In-depth essays created by the University of Virginia on Taylor’s life and administration.

The Zachary Taylor National Cemetery was established in 1928 by an act of Congress initiated by the Taylor family to have the government take title to the family burial site where President Zachary Taylor was interred. Two donations of land from the state of Kentucky increased the original half-acre Taylor plot to the national cemetery’s present size of 16 acres. Although the Taylor family plot, which includes a tomb and mausoleum, is encompassed within the walled cemetery, it does not belong to the United States. Despite the best efforts of the Taylor family, the Army judge advocate general decided against federal possession. The Taylor family burial ground is, however, cared for and maintained by the National Cemetery Administration. 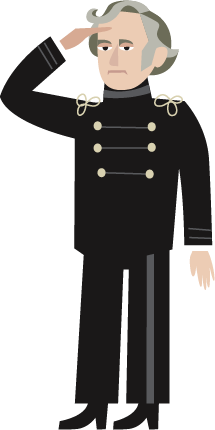 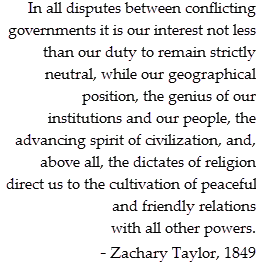