Born and raised in Washington, D.C., of Greek descent, Barbara Harrison is the author of Theo (Clarion), the story of an aspiring child-puppeteer growing up during World War II in Nazi-occupied Greece, and two biographies for young people: A Twilight Struggle: The Life of John Fitzgerald Kennedy, with Daniel Terris (Lothrop), and A Ripple of Hope: The Life of Robert F. Kennedy (Dutton). She also directed research with Dan Terris of two award-winning HBO television documentaries on JFK and RFK. She is coeditor with Gregory Maguire of two books about children’s literature and she is the author of reviews and essays on reading, literature, and contemporary society published in Commonweal, the Horn Book Magazine, and the Quarterly Journal of the Library of Congress.

She has taught in the public schools of Washington, D.C., and Newton, Massachusetts, and holds a Ph.D. in English and American Literature from Tufts University. She has founded or co-founded programs aimed at raising public consciousness and knowledge of the importance of the humanities in American life, including The Center for the Study of Children’s Literature at Simmons College, Children’s Literature New England, and The Examined Life: Greek Studies in the Schools.

Ms. Harrison writes about her contribution to Our White House: “When JFK was inaugurated, I was a fledgling teacher in Washington, D.C.  He was forty-three years old, the youngest president in history, a World War II hero with a beautiful wife, an infant son, and toddler daughter; and he spoke the language of possibility. For the fifth-graders that I taught and for me, the White House and its inhabitants became a daily topic of conversation.

“On the eve of his inauguration, a light snow fell, sending the capital into a tailspin and ushering in one of the most charismatic presidents in the nation’s history. There was an uplifting quality about JFK’s style of leadership. He evoked the feeling that “we, the people” really could be better than we were, that we could rise to higher ground, and that as a nation representing so many different cultures and ethnicities, we were a microcosm of the world; the spirit of each nation coursed through our own veins. Never has the idea of commonality and reciprocity been more real. Never has hope burned so fervently.

“The President had grown up in a household where “action” was the password and driving force, and he galvanized a citizenry to the nation’s heroic promise and humane mission. “Ask not what your country can do for you,” he said. “Ask what you can do for your country.”

“One of his greatest appeals was his respect for knowledge, and for books and the power of language. Both he and his wife were drawn to words. He had worked as a journalist before running for office, and at twenty-three years old, his first book Why England Slept was published. He knew the demands, the discipline, the hours a writer might spend over a single word or a composer over a single note. He respected the artist’s capacity through his work whether it was a poem, a painting, or a piece of music to illuminate the ongoing challenges of the individual and the nation.

“While doing research for two television documentaries, followed by biographies of President Kennedy and Bobby Kennedy, I relived an unparalleled period in American history. I spent three years at the JFK Library in Boston reading personal papers of Kennedy family members and those associated with JFK’s administration. Over 1,000 transcribed interviews, including those of White House employees, the doorman, the electrician, etc.; and poring over thousands of photographs, audiotapes, home movies, and television stock footage.

“I now live in Cambridge, Massachusetts, and Washington, D.C., and work with teachers in a program to strengthen the study of ancient Greece in the schools. Titled The Examined Life: Greek Studies in the Schools, the program takes as its theme the Socratic call to the examined life and asks us if the Greeks still have something to teach us about ourselves and our times. President Kennedy often quoted the Greeks, and Bobby was comforted in grief by a book by classicist Edith Hamilton that Jackie Kennedy gave him.

“In walks through the JFK Memorial Park near my home in Cambridge, I often pause to read JFK’s words inscribed on the marble columns and into the wall encircling the fountain. No matter how many times I read them, I am profoundly moved. “I look forward to an America which will not be afraid of grace and beauty, which will protect the beauty of our natural environment . . . an America that commands respect throughout the world not only for its strength but for its civilization as well.” The words are as uplifting today as they were when President Kennedy said them on receiving an Honorary Degree from Amherst College a month before he was assassinated.”

Film Documentaries and Other Books Written and Edited by Barbara Harrison

Travelers in Time: Past, Present, and to Come, coeditor Gregory Maguire (Green Bay) 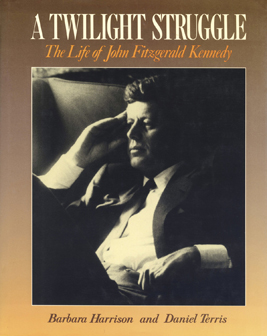