The first job Nancy Carpenter got after finishing college was an internship as a graphic reporter for a major news service. Graphic reporters created charts and maps to accompany news stories. Her first illustrations appeared in the New York Times. She also illustrated greeting cards.

As she continued to illustrate for newspapers, Carpenter got to know art directors in children’s publishing. Her big break came when she was hired to create a book cover after another illustrator had trouble with it. Carpenter says, “I handed in a drawing the publisher was happy with, but they later ruined it by spilling something all over it. So I redid the job for free.” A few days later, the publisher asked her to illustrate an entire book. Since then she has illustrated more than ten picture books.

When Nancy Carpenter meets kids, they often ask her whether she has a dog. “I always draw dogs,” she says. “They also ask me what my cat’s name is because I try to sneak my cat into every book.”

Fannie in the Kitchen: The Whole Story From Soup to Nuts of How Fannie Farmer Invented Recipes with Precise Measurements by Deborah Hopkinson (Atheneum Books for Young Readers)

Masai and I written by Virginia Kroll (Simon & Schuster)

Can You Dance, Dalila? written by Virginia Kroll (Simon & Schuster) 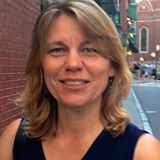